Can You Eat Sheepshead Fish? How To Cook It? 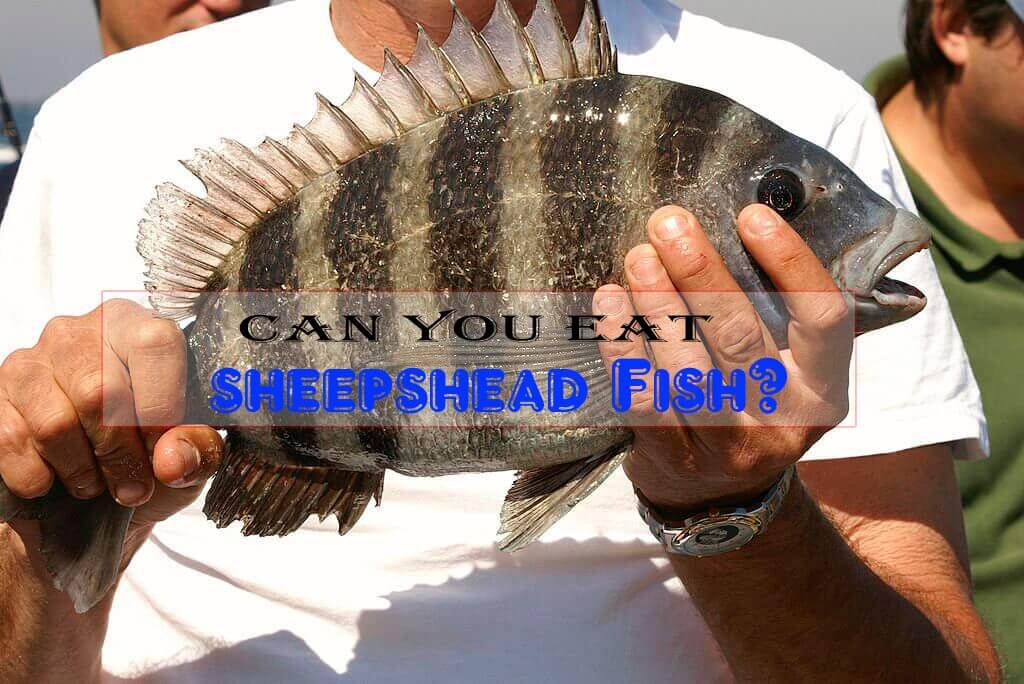 Sheepshead fish have a sheep-like appearance. They attract saltwater fisherman because of their toothy, sheepish smiles and jagged scales, and catching one requires a lot of patience as well as skill. So, can you eat sheepshead fish though?

Yes, sheepshead fish can be eaten, but with those gnashers, they could just bite you instead! 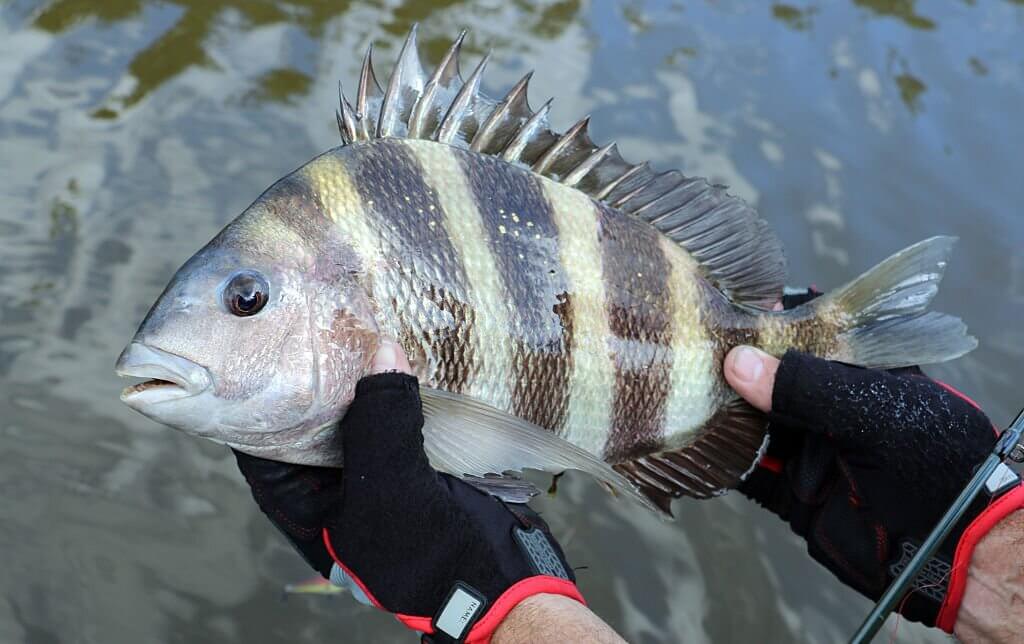 Anglers and anybody who has attempted to consume sheepshead will tell you that the answer is definitely “yes.”

Sheepshead fish may undoubtedly be eaten, and they are probably among the best-tasting seafood found throughout most of the Gulf of Mexico shorelines, and even in the Caribbean Islands.

Sheepshead flesh is defined as a light colored filet which is solid and perfect for grilling or frying in a number of dishes.

While other species of fish lose flesh quality and taste as they get bigger and mature, sheepshead usually have a lot of the texture and flavor they had when they were younger.

It’s worth noting that if you’re wanting to retain the finest sheepshead for dining, younger sheepshead are frequently the better option.

Most fishermen who retain sheepshead for the purpose of preparing and cooking them will catch fish weighing between 3 up to 5 pounds, since they are the best in regards to the quality of meat, as well as flavor and texture.

You can read more: Can You Eat Snook? Is It Safe to Eat?

Where Do Sheepshead Fish Live? 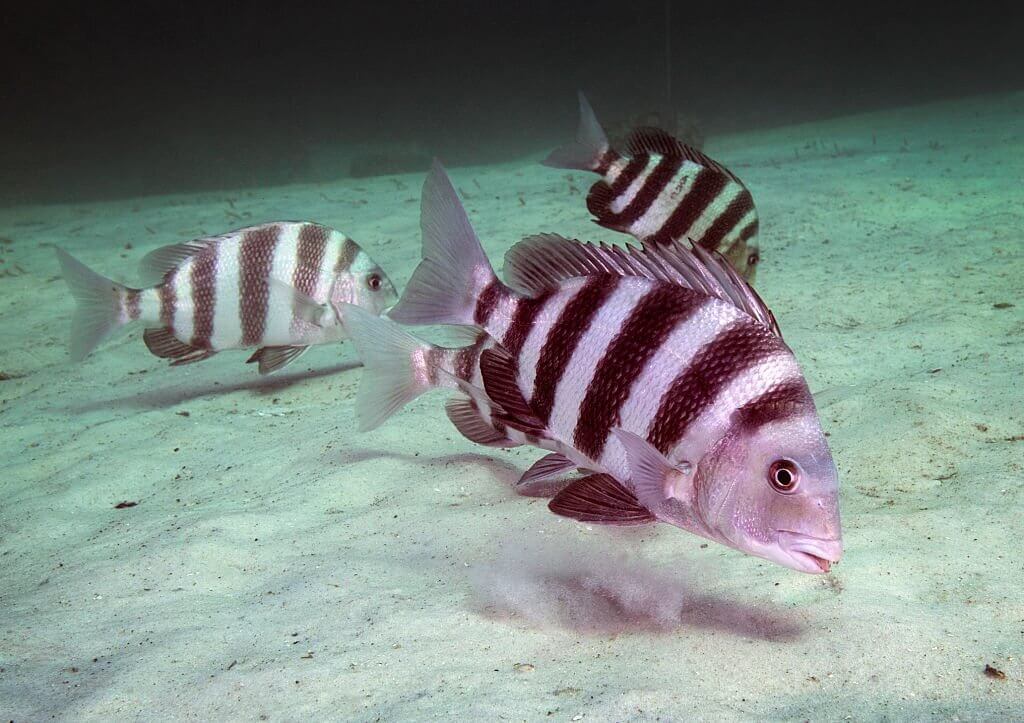 From Massachusetts and Cape Cod to the Gulf of Mexico and Florida, they may be located in the Atlantic. They eat on crustaceans, marine plants, and mollusks and reside near piers, mangroves, wrecks, and reefs.

Sheepshead has a great shellfish taste, and the flesh is firm, juicy, and greasy, according to most experts. The flavor is similar to that of a black bass and triggerfish, but it has its own texture and flavor.

The high moisture and oil content of this fish adds to its firm, flaky, and sweet mouthfeel.

You should try the sheepshead if you’ve never experienced what it implies when people say “trash in, rubbish out.” 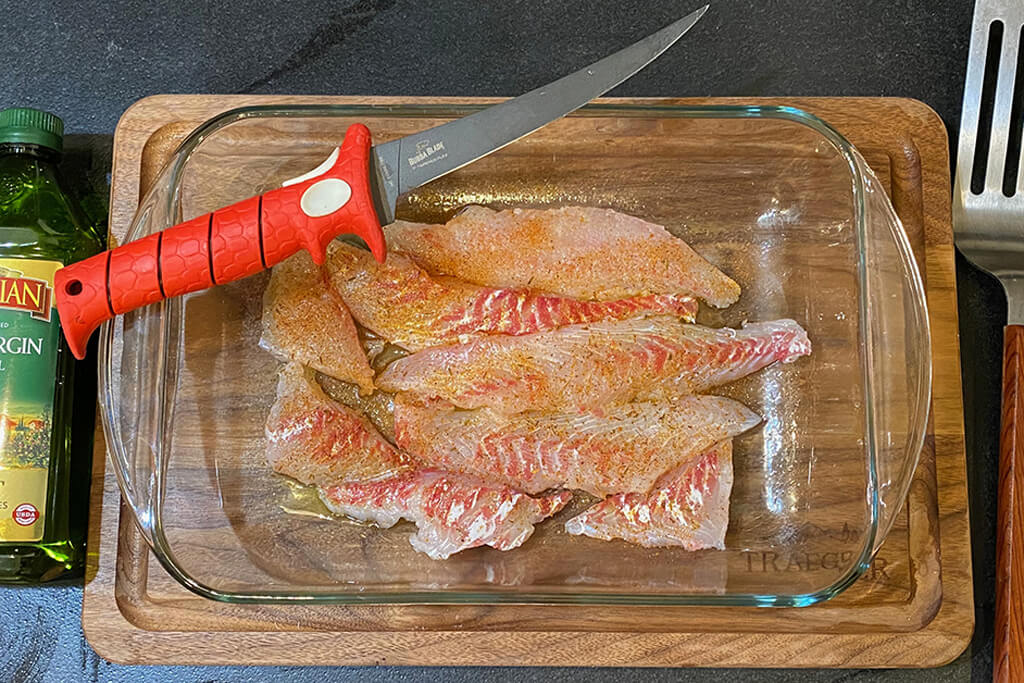 This fish is an omnivore, which means it eats a variety of foods. Fiddler crabs, barnacles, clams, as well as mollusks are among the shellfish as well as other crustaceans it eats.

Even though sheepsheads do not have the most appealing appearance, it is an excellent source of protein. Because of its unattractive appearance, the majority of people are dubious.

The sheepshead’s strange teeth that resemble that of a human, help it grind and scrape barnacles off surfaces, make matters worse.

You can read more: Can You Eat Smallmouth Bass?

Can You Eat Sheepshead Fish Raw?

Sheepshead can be eaten uncooked. It is excellent for sashimi and sushi, especially when served with a dipping sauce like soy seasoned with shredded ginger and a pinch of wasabi. There are a plethora of available recipes, each with a different serving suggestion.

Is a sheepshead a saltwater or freshwater fish?

The sheepshead seems to be the only member among the Sciaenidae group that is a freshwater fish, which contains famous sport fish like the red drum. 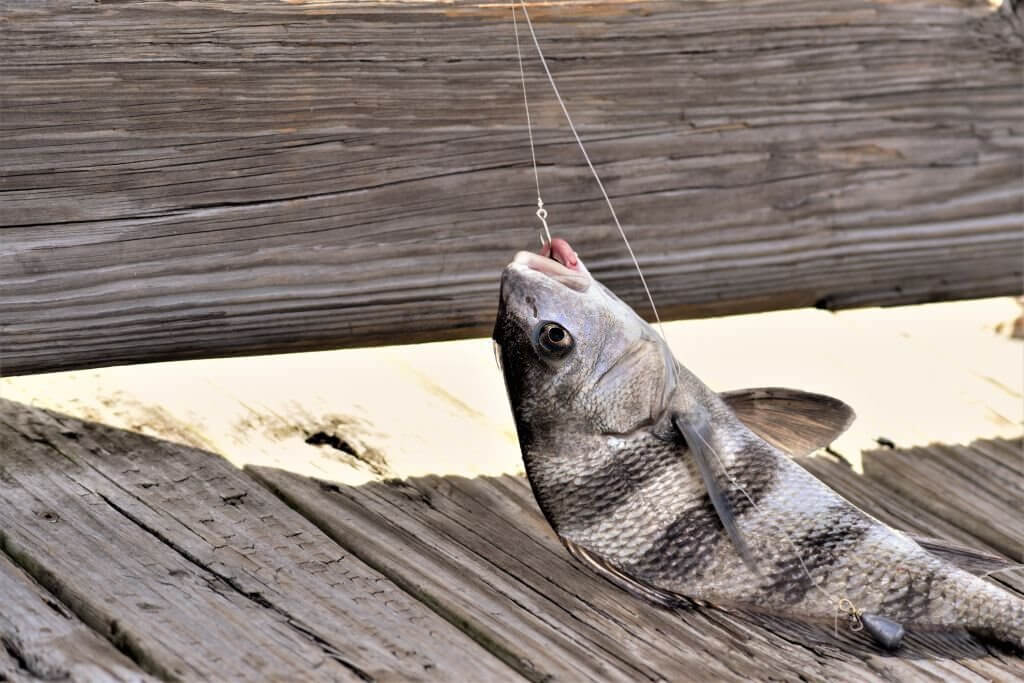 Locals and natives in the Great Lakes area consume sheepshead for millennia and crafted jewelry out of its unusual otolith (ear cartilage), which current Great Lakes dwellers try to pursue for.

Anglers as well as commercial fishermen have traditionally considered the freshwater bass as an annoyance unworthy of being classified as a sport or food fish.

You can read more: Can You Eat Alligator Gar?

Do sheepshead fish have worms?

Nematodes, ciliates, trematodes, as well as isopods are among the parasites found in sheepshead. Experts say you shouldn’t be concerned as long as you boil them as well as don’t consume them raw.

Can you eat sheepshead from Lake Erie?

Because you can’t consume them, they just grow in size. People ate whatever they caught, which was occasionally just sheepshead.

About 620,000 fish pass through New York’s share of Lake Ontario and Lake Eerie each year. Apparently, they are rather tasty; the difficulty would be that sheepsheads don’t really freeze properly.

A toothy sheepshead mouth may frighten individuals who are unaccustomed with the species, yet it poses no harm to people. The fish will not nibble on someone unless they are irritated.

A fully developed sheepshead can reach a length of three feet. They’ll ultimately have three rows of stunted, flat canines in their jaw bone and a couple of rows of flat, stubby teeth amidst their bottom jaw.

The fish’s teeth in the front, which looks like a human incisors, are even enamel-coated.

Sheepshead from Florida are delicious to eat. When contrasted to certain other species of fish, the texture of the sheepshead is different. The flesh turns flaky after being prepared, with a tender and subtle mouthfeel. 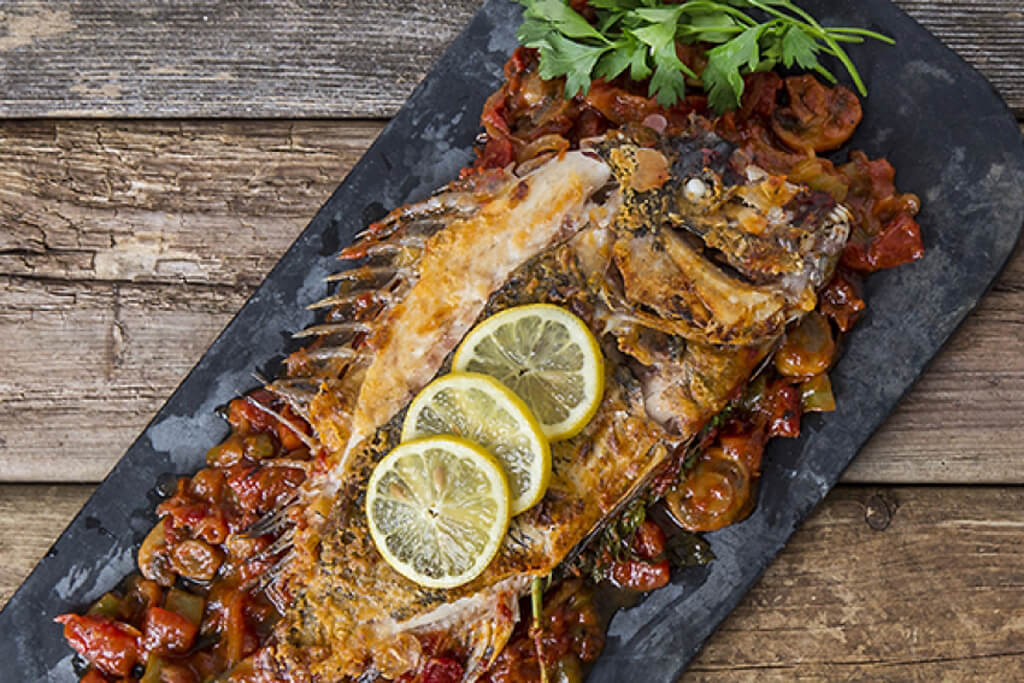 The oil and moisture content of the sheepshead’s meat gives it a packed and solid texture, unlike that of drier, fluffier species of fish. The taste of the fish is also enhanced by the oil/moisture.

You can read more: Can You Eat Bowfin?

How long does sheepshead take to cook?

The length of time it takes to cook a sheepshead varies depending on the recipe you’re using. It doesn’t take long, though, because a sheepshead is a fish. It usually lasts between thirty and sixty minutes.

Where to Find Sheepshead

You must understand where to seek for sheepshead when you want to go sheepshead angling. The convict species gets its name from the black stripes that vertically run across its body as well as its reputation for snatching bait. 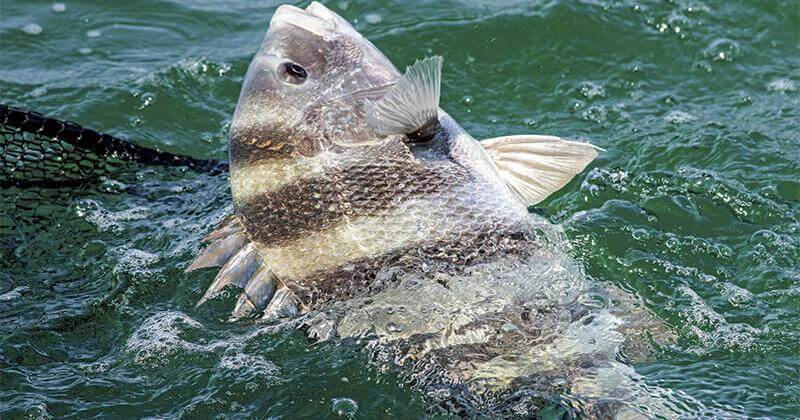 It may be discovered in the seas off the East Coast of the United States, particularly in Florida and North Carolina, as well as the Atlantic Ocean and the Gulf of Mexico.

Sheepshead are most commonly found around features such as piers, jetties, pilings, pillars, rocks, and old bridges since they like scraping particles of food off these surfaces. They’ll usually be located 10 feet or over below ground.

They congregate from December throughout April in preparation for spawning, with the biggest numbers predicted in March up to April. These fish, on the other hand, may be found all year along the Gulf Coast.

Sheepshead move from offshore regions to estuaries every year to spawn. This species of fish is most commonly found in places where tiny invertebrates grow, providing a great food supply.

Mangrove trunks, oyster beds, and architectural structures such as docks, piers, seawalls, and pilings are all favorites. They can also be spotted in sand flats and sea grasses in shallow seas at other periods.

You can read more: Can You Eat Sturgeon?

How to Catch Sheepshead

Anglers may find it difficult to catch sheepshead, especially if they are unfamiliar with these aggressive fish. The physical peculiarities of their jaws make it difficult for all of them to be tempted by most lures used to capture other species.

The mouth is tiny, with human-like canines that are designed to break the bones of crustaceans including crabs, oysters, and barnacles.

A little circle hook that fits in its mouth as well as the bait are required for catching these amusing-looking yet excellent fish. Unlike other intelligent creatures, the sheepshead is delicate while catching prey and can snare the bait and flee unobserved. 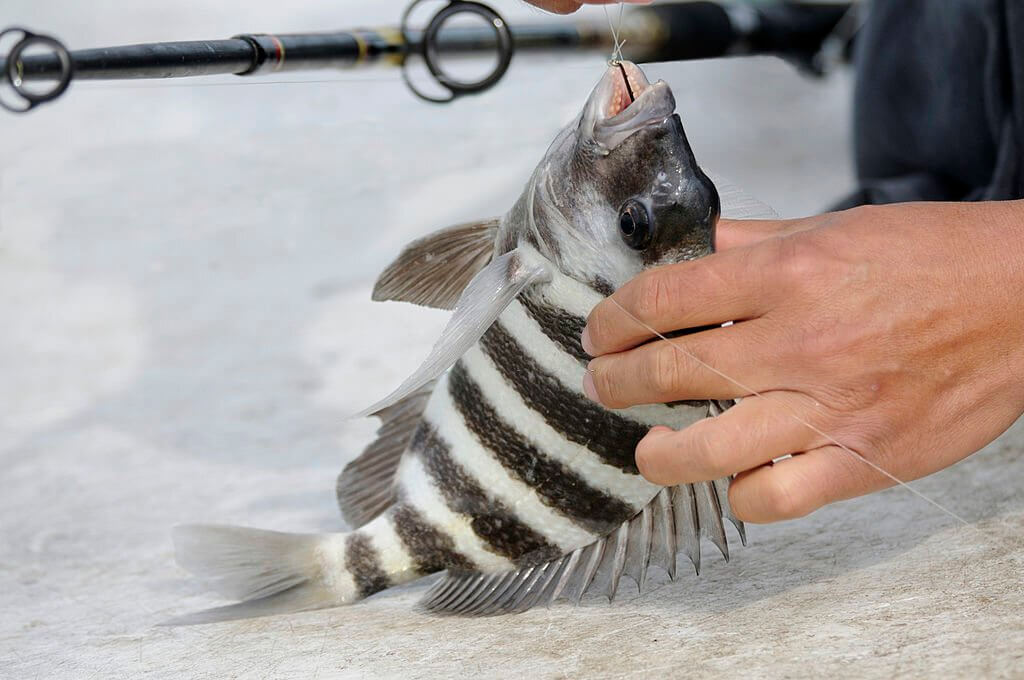 If you wish to tame this fish, carefully elevate the rod and slowly draw it back to check whether there is any opposition.

Clams, squids, and shrimps are some of the lures used to capture sheepshead, however most fishermen utilize a fiddler crab. The lure must be properly attached; otherwise, it’s gonna be sucked, crushed, and the wire will spew before you know it.

Once it comes to lure theft, this is a true felon, albeit it does take time to make sure it’s well hooked. Make sure your hook is precise enough to pierce the sheepshead’s throat’s firm and body exterior.

If you’re used to synthetic baits, be prepared to be frustrated since the sheepshead will not be fooled about with.

How do you cook sheepshead?

Sheepshead can be cooked in a variety of ways, including grilling, boiling, baking, roasting, as well as frying the entire fish.

Preparing the sheepshead, despite being among the most delectable meals you can serve, may be difficult for many people. Because of the many spines on the rear of this species and the difficult ribs, although with the greatest fileting blade, some fishermen decide to return it to the sea.

Those would be the people that have never tried this strange-looking fish.

There are a few processes to creating the sheepshead.

As you’ll see, numerous people find cleaning sheepshead to be a difficult task, but the exquisite and sweet taste makes up for the inconvenience.

How do you make a sheepshead taste like lobster?

Drizzle the cutlets with butter, season with Old Bay seasoning, and roast them in your oven or on your grill. Serve alongside lemon and butter for dipping. The leftover filet is utilized to make a lobster/lobster salad used for sandwiches!

They eat crustaceans, therefore if you prepare and serve these the same way, they will taste like them. The tinier fish have a crab-like flavor, whereas the bigger ones have a lobster-like flavor.

Thank you for reading the article “Can You Eat Sheepshead Fish”, I hope the article has provided you with a lot of useful information about Sheepshead fish. Wish you have a nice day.