The gravel bike vs road bike because of its wider tires and longer wheelbase and clearance. It’s the best pick for tough terrain and longer rides.

Gravel bike has been a dormant bike which gained in 2021. It’s currently one of the best bikes for off-roading. The gravel bikes have bigger tires which allow you to ride on any trail. Road bikes will also enable you to ride on various tracks, from local paths to city trails. But what’s the difference between a gravel bike vs. road bike? 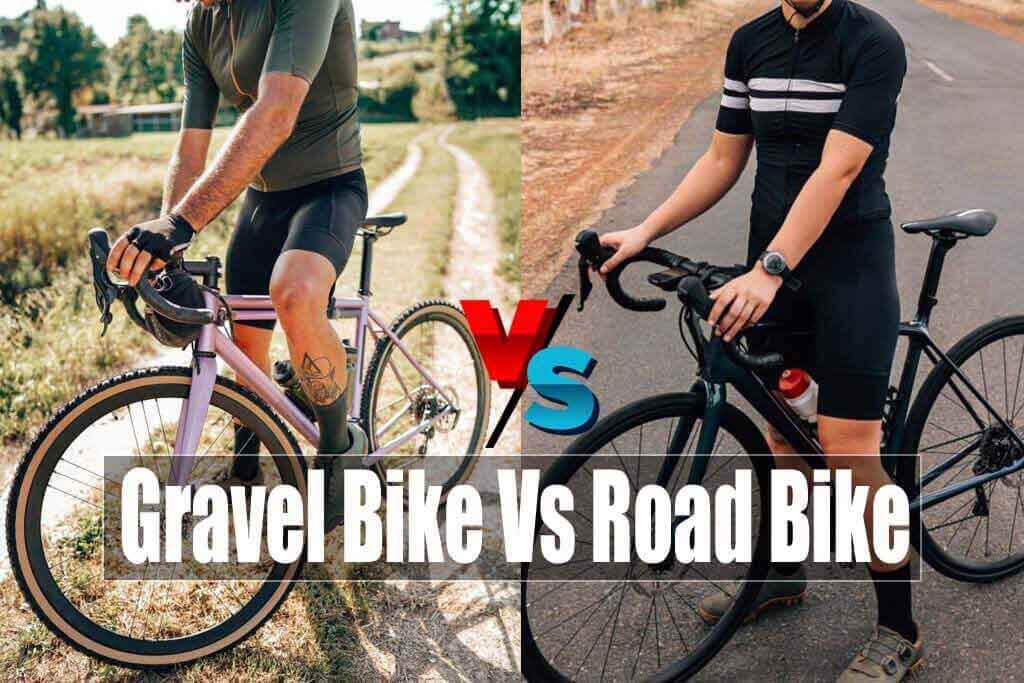 The difference between the two bicycles lies in their gears, tires, brakes, and frame geometry. The gravel bike has wider tires, a longer wheelbase, a slack head tube angle, and uses disc brakes. On the other hand, a road bike has a shorter wheelbase, less tire clearance, and disc/rim brakes.

If you’re having difficulties differentiating between the two bikes, this guide will help you understand the differences.

What Is a Gravel Bike?

A gravel bike allows you to enjoy any off-roading experience. You can use it on rough roads, during bad weather conditions, and on any off-road, that is not a mountain bike trail which tends to be much technical and rough. 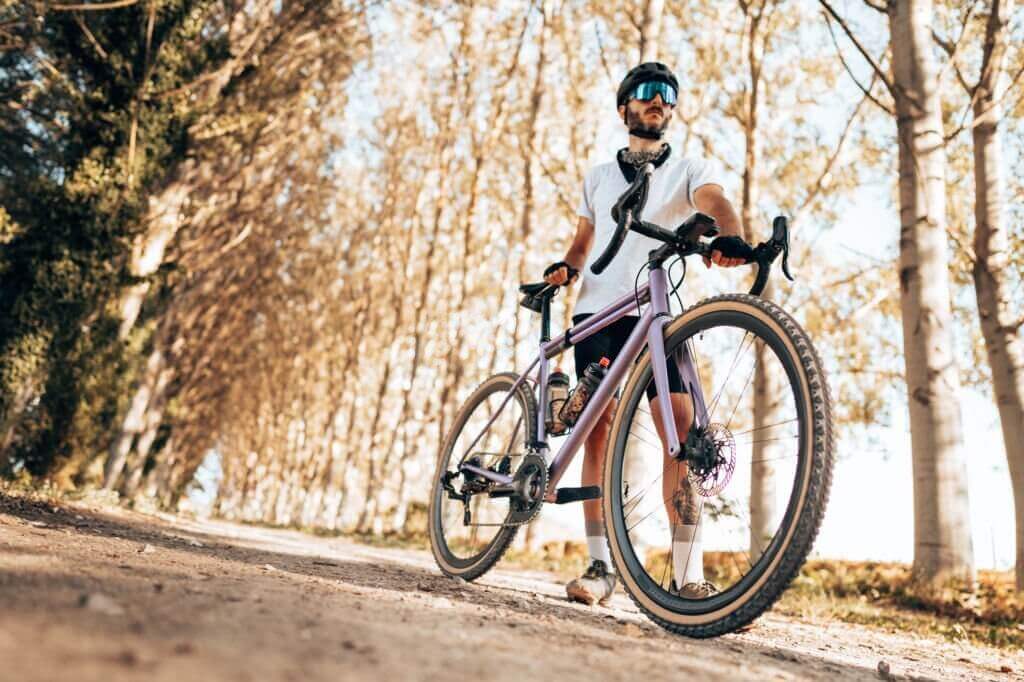 It enables you to stay comfortable while riding for long hours because its design entails a long wheelbase and an upright seat. The gravel bikes are also lightweight, with wider tires and powerful brakes.

What Is a Road Bike?

To understand the difference between a gravel bike vs. road bike, you’ve got to know the basics of each of them. A road bike is designed for tarmac riding, as its name suggests. You can use it on city streets, bike paths, or alpine passes. It has narrow and slick tires, enabling them to move on the right trail at high speed. 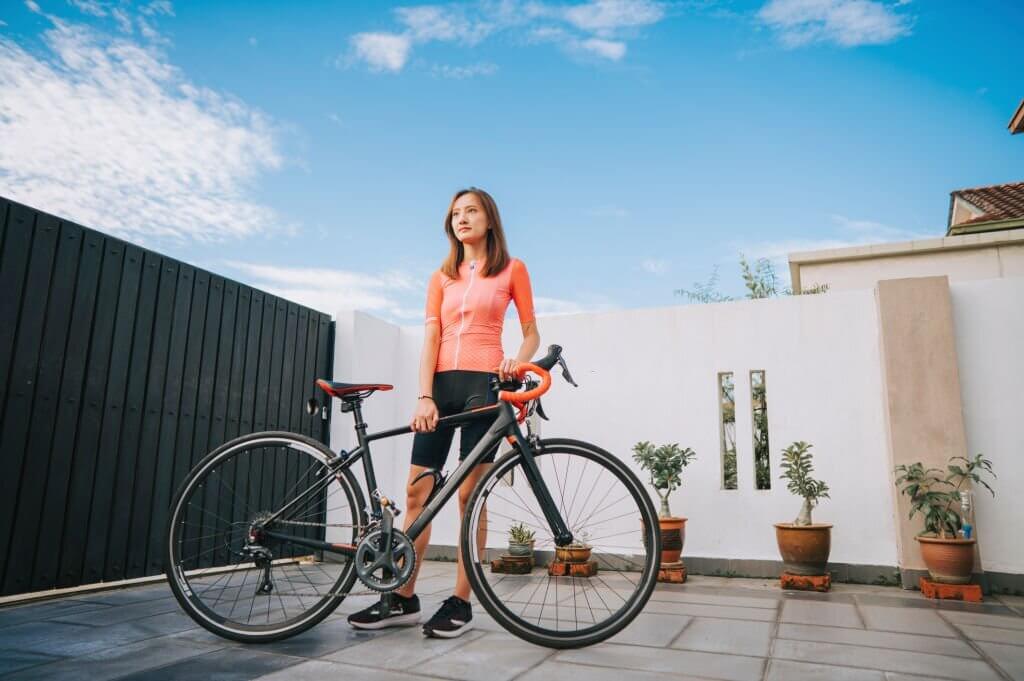 You cannot ride a road bike on wet terrain and off roads because of their wheel type. But these bikes have an aerodynamic design, are lighter, and are faster than gravel bikes. However, some road bikes are not as aggressive as the rest and have lights and racks, making them ideal for commuters.

If you want to understand the difference between a gravel bike vs. road bike, look at their technical features. These features that make the two bikes differ include;

Differentiating between the frame of a gravel bike vs. road bike can be a huge challenge as they are very similar. The two bikes have the same shape frames with drop bars and a design which improves their aerodynamics and speed. However, after a keen look, you will see some features which make them differ.

A gravel bike has a longer wheelbase and a smaller head tube angle, making it look longer and increasing its stability on rugged terrain. The frame’s length to the seat ratio makes you ride in the best upright position, which is much more comfortable. This can enable you to cycle for long hours without getting tired.

On the other hand, a road bike has a shorter wheelbase and a longer head tube angle, making cyclists stretch further to reach the handlebars. This makes it tough to remain stable when riding on a technical trail, and you can have challenges controlling the bike.

Maybe you like: Mountain Bike Vs Hybrid Bike: How Are They Different

One of the visible differences between a gravel bike vs. road bike lies in their tires. The tires of gravel bikes are wider than those of road bikes. They are about 40mm, making them fun to use as it increases stability and grip. The size of the gravel tires also makes them have a bigger wheel clearance. The frames and suspension are also made to allow the wider tires of up to 50 mm to work effectively.

To avoid challenges while on the go, choose the size of the tire depending on the nature of the trail and the weather condition. If you’re going to ride on tough terrain, it’s best to go for a tire with good grip, which will not be high resistance. The gravel bike tires are also tubeless as they use sealants. This prevents the chances of getting punctures while riding on challenging terrain.

On the other hand, the road bike tires are the opposite of the gravel bike tires. They have narrow tires and less clearance because of where they are designed to be used. Apart from that, they are smoother and slicker, increasing their resistance on the ground.

The race tires for a road bike roll faster and have light treads, while training tires tend to be thicker with bigger treads. Road bike tires vary in width from 23mm to 28mm. However, some tires can be about 40mm. The road bike tires have clinchers which increase their chances of getting punctures.

Another feature that will give you difficulty differentiating between gravel vs. road bike is the handlebars. But since these bikes are designed for different purposes, the drop bars are not the same.

The handlebars of gravel bikes are wider than those of road bikes. The drop bars are also flared, making them have an outward angle. This improves the grip and support, enabling you to ride on technical roads with less challenges. The gravel bike handlebars measure up to 52mm in width.

The road bike handles are between 42 and 44mm wide. They are meant to be aerodynamic and have a stretched-out posture. This makes you ride with your elbows tucked in according to the position of the handlebars, which are normally the same width as your shoulders.

Maybe you like: SRAM NX Vs GX: Understanding the Difference

However, not all road bikes have disc brakes, as some still use rim brakes. The rim brakes are not as super as disc brakes but lightweight and easy to maintain. The rim brakes will also enable you to have better control of the road bike on any of the roads designed for it. However, they don’t perform well on wet surfaces, especially when going downhill at high speed.

Another notable difference between a gravel bike vs. road bike is the gears. The gears of a gravel bike are 1X and 2X setups giving you the option to choose what suits your riding trail. The 1x setups are lighter since they don’t have a front derailleur.

They also don’t have problems with the chain keeping dropping. However, most cyclists love the 2x setup because it has more gear range. But it increases the chances of dropping the chain, especially on bumpy terrain.

Maybe you like:27.5 Vs 29 Inches Wheels: Difference Between Wheel Size

Which Is the Best Between Gravel Bike and Road Bike?

The best bike between a gravel bike vs. road bike will be the one that meets your needs. If you’re looking for a bicycle to ride to work or fun rides on city roads, buy a road bike. However, settle for a gravel bike if you want a bike for a technical trail or one you can use anywhere. This also depends on the riding posture you’re comfortable with. If you prefer riding an upright posture, a gravel bike will help you stay comfortable regardless of the distance you’ll cover.

Can You Use a Road Bike as A Gravel Bike?

You can also convert a road bike to a gravel bike if you don’t want to spend extra cash to buy a newer one. This is possible because the two bikes’ main difference lies in their tire clearance and frame geometry. To achieve this, you should consider replacing the tires, the wheels, gearing, and contact points.

Maybe you like: Mechanical Vs Hydraulic Disc Brake: Understanding the Difference

The gravel bike frame enables you to ride comfortably as you’ll be seated upright, preventing your back from straining. Its tires are also wider with good traction, which suits tough terrain, and it uses disc brakes which makes you have better control of the bike. However, the road bike best suits city roads because it has narrow tires with less grip but high resistance. Most road bikes have rim brakes, and it also has a shorter wheelbase.