Sheepshead vs Black drum are two fish that are often mistaken for one another not because they look alike but because many people can’t tell which is the other. Well, these two fish has distinct differences that can set them apart.

For starters, let’s take a look at their physical appearance. Sheepshead has a much more slender and streamlined body than a Black drum. They also have 5 or 6 vertical bars on their sides, while Black drums only have 3 to 4. Another way to tell them apart is by looking at their mouths. Sheepshead has much smaller mouths than Black drums. 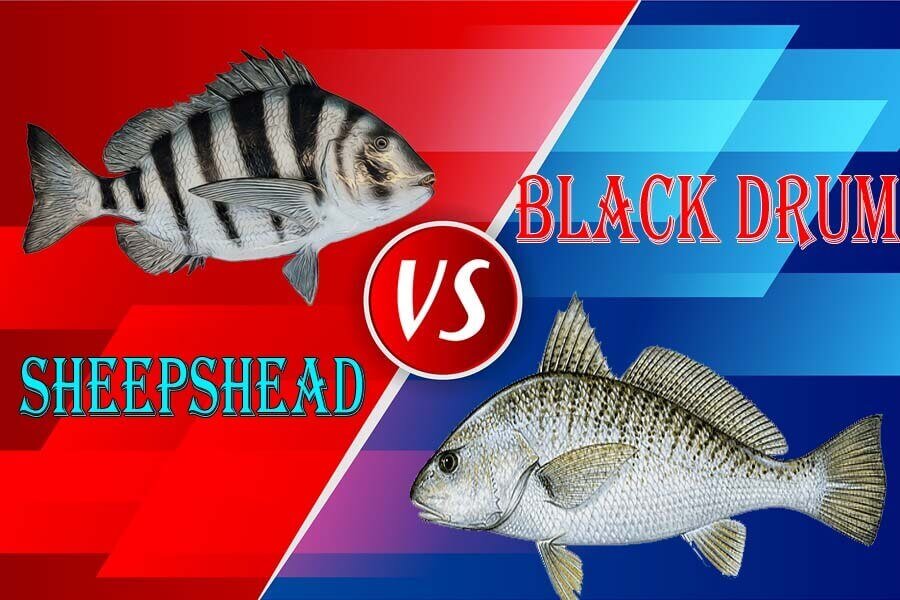 Thanks to their fighting nature, many anglers and recreational fishers enjoy catching these fish. They’re not the biggest fish in the sea, but they can put up a good fight when hooked.

While their physical appearance and fighting nature are both key ways to tell these fish apart, there are other big differences between them which you’ll find out below. Here are the key differences that will help you tell Sheepshead from Black drum.

The first thing to look at to differentiate the fish is their mouth and teeth. The mouth of the head is much narrower than that of the Black drum. The shape of the mouth tends to resemble that of a sheep’s head. They also have smaller, more delicate-looking teeth. This fish has small, human-like teeth that they use to crush crustaceans. 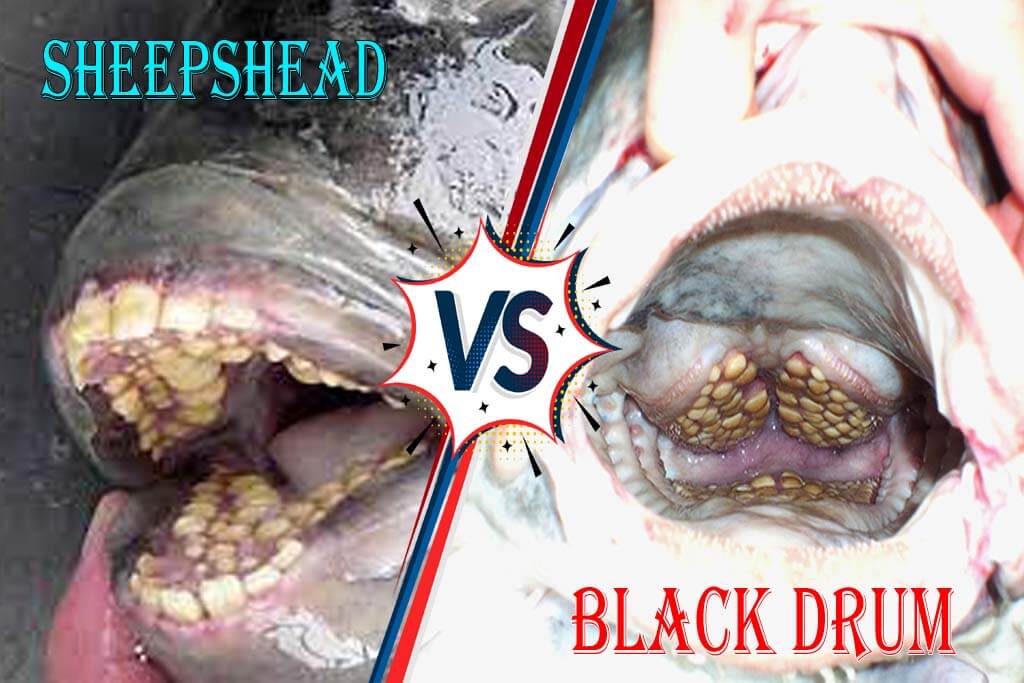 In contrast, Black drums have much larger teeth that are blunt and not well suited for crushing anything. But they have well-defined incisors and molars. Their mouth is also much wider than that of the Sheepshead.

Another way to tell these two fish apart is by looking at their bodies. The body of the Sheepshead is more compressed and oval-shaped, while the Black drum’s body is more cylindrical. The Sheepshead also has a higher back and a shorter snout.

Anglers describe Black drums as more elongated. The body’s widest point starts from the beginning of the dorsal fin and goes downwards and back towards the tail. Sheepshead has a more rounded shape, often described as ‘football-shaped.’

Another way to tell these fish apart is by their coloring. Sheepshead has yellow and orange stripes that run vertically. On the other hand, Black drums are much darker with more of a grayish color. The small Black drums have gray strips which darken as they grow older.

Another physical difference to look at is the size of the fish. Black drums can get quite large. The common ones weigh between one to ten pounds but can go up to seventy-five.  Sheepshead is smaller in comparison and only weighs between one to seven pounds. However, you can also find some weighing up to 20 pounds.

The fins are the best ways to quickly identify and differentiate between Black drums and Sheepsheads. Black drums have a long, thin dorsal fin that runs almost the entire length of their body and is separated into two parts. The pectoral fins of Black drums are also long but not as tall as the dorsal fin.

The head is another helpful way you can tell these two species apart. Black drums have a long, pointed nose that protrudes out further than their eyes. They also have long barbels (whisker-like sensory organs) near their mouths that they use to find food.

Sheepshead, on the other hand, has a shorter, blunter nose. Their Barbels are also shorter and less noticeable. Their eyes are set further back on their head than the Black drum’s eyes, giving them a profile that is much more rounded.

As for their habitat, they both like to live among rocks and reefs. They also spend time in seagrass beds and oyster reefs. The Sheepshead is known to enter brackish waters, while the Black drum prefers staying in saltwater.

Black drums are sometimes found in freshwater bodies but tend to go back to the ocean during storms. They love deep and turbid waters common along the coast. Sheepsheads love shallow and warm waters.

The diet of these two fish is not quite different from each other, but there are some exceptions. Black drums feed on crabs, shrimp, squid, worms, and small fish. They use their sense of smell and chin barbel to find food at the bottom.

On the other hand, Sheepshead is usually omnivores and likes feeding on small vertebrates, insects, and plant products. The adults and large juvenile ones also feed on barnacles, crabs, and oysters. They use their sharp teeth to break through the shells of their prey. They can also eat worms, larvae, and planktons.

Anglers and recreational fishers use similar methods to catch both Black drums and Sheepshead. The most common methods are using live or natural bait, bottom fishing, and jigging. 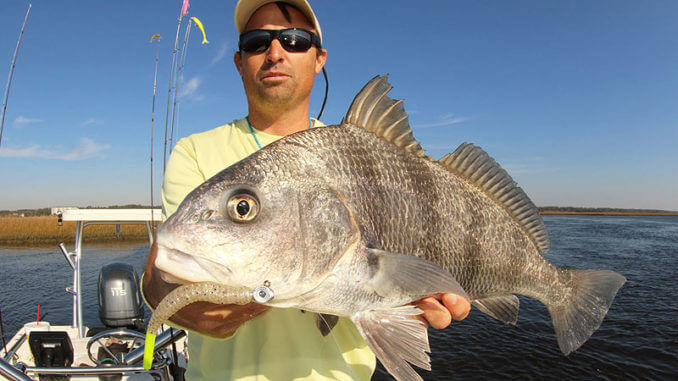 Use a heavy rod with a reel that can hold at least 250 yards of a 30-pound test line to catch Black drums. Bait your hook with cut crab, shrimp, or fish. Use a sinker that is heavy enough to keep your bait on the bottom. Cast your line out and wait for the Black drum to bite.

To catch Sheepshead, use light to a medium-light rod with a reel that can hold at least 150 yards of a 10-pound test line. Bait your hook with shrimp, crabs, or sand fleas. Use a sinker that is heavy enough to keep your bait on the bottom. Cast your line out and wait for the Sheepshead to bite. 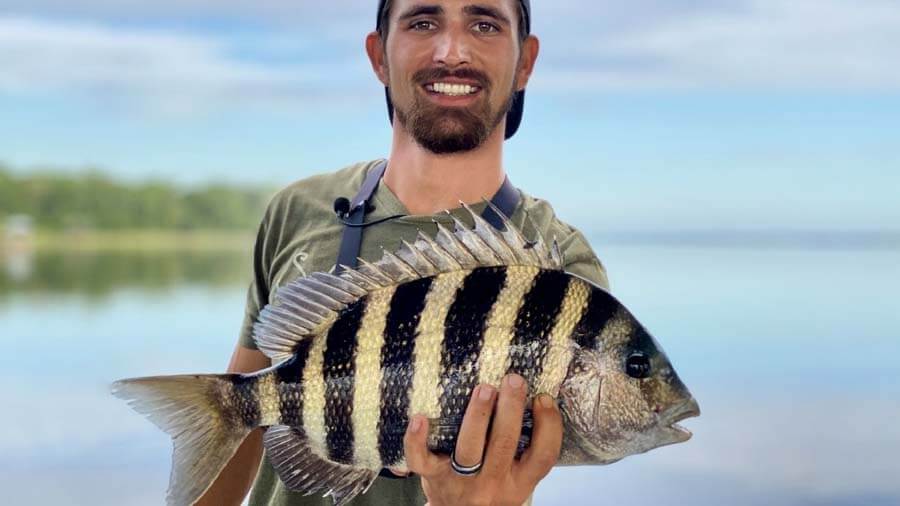 You can eat both Black drum and Sheepshead as they’re delicious and make great dishes.  Black drum meat is generally white and flaky, while Sheepshead meat is pinkish in color.

Black drum is described as having a taste similar to redfish or red drum. The meat taste and texture tend to decline as the fish grows older, but it’s still decent enough. To enjoy it better, you can eat the younger ones as they have white meat with a firm texture.

Experienced anglers say that Sheepshead is tastier and has a richer texture than the Black drum. Its flavor is very sweet, and the taste doesn’t decline as it grows older.

Both Black drum and Sheepshead can be cooked in a variety of ways. They can be baked, grilled, fried, or even smoked. Whichever method you choose, simply season the fish with salt, pepper, and lemon juice before cooking. Enjoy your fresh catch!

When it comes to eating freshwater fish, you should keep a few things in mind. First, never eat a fish that has been swimming in polluted water. This can make you very sick. Second, always clean your fish thoroughly before cooking it. This means removing the scales, guts, and bloodline. Third, cook your fish all the way through. Undercooked fish can also make you sick.

Black drum is known to contain high contents of omega-3 fatty acids. These are the “good” fats that have been shown to promote heart health by helping to lower cholesterol and blood pressure levels. Additionally, omega-3 fatty acids are essential for brain development and function. They can also help to reduce inflammation throughout the body. It’s a perfect diet for those looking to improve their immune system and health.

Sheepshead also contains high contents of omega-3, protein, and Vitamin A, D, and B-12.  DHA omega-3 fatty acids enhance mental health and brain development. The protein in Sheepshead helps with tissue repair and growth.  Vitamin B-12 content is essential for maintaining a healthy nervous system, while Vitamin A maintains vision and skin health.

While Black drum and Sheepshead are both excellent sources of nutrition, they can also contain harmful bacteria that can make you sick. It’s important to cook these fish properly to kill any bacteria present.

Sheepshead is a great fighter that won’t go down easily, but that’s the fun part of fishing. Here are some tips to help you catch it easily.

Like Sheepshead, the Black drum also doesn’t go down without a fight. You have to be very careful and creative to take your catch home. Here are some fishing tips for Black drum;

If you’re an angler or a recreational fisher, you should always know the type of fish you catch to avoid any confusion. It’s now much easier to identify Sheepshead vs Black drum by simply looking at physical features such as color, shape, and size.

And knowing the difference between these two fish can help you make better decisions when fishing. When fishing for Black drums, it is essential to remember that they are bottom feeders. This means that they will typically stay near the bottom of the body of water that they are in.

Sheepsheads, on the other hand, are known to be opportunistic feeders. This means that they will feed on just about anything they can find. So, when fishing for sheepshead, it is important to use bait that imitates their natural diet, such as small crabs or shrimp.

Now that you know the difference between a lack drum and Sheepshead, you can be sure to use the right bait and techniques when fishing for either fish. You’re now ready to go out there and catch either Sheepshead or black drum. Happy fishing!

Monofilament vs Fluorocarbon: Which is Better?