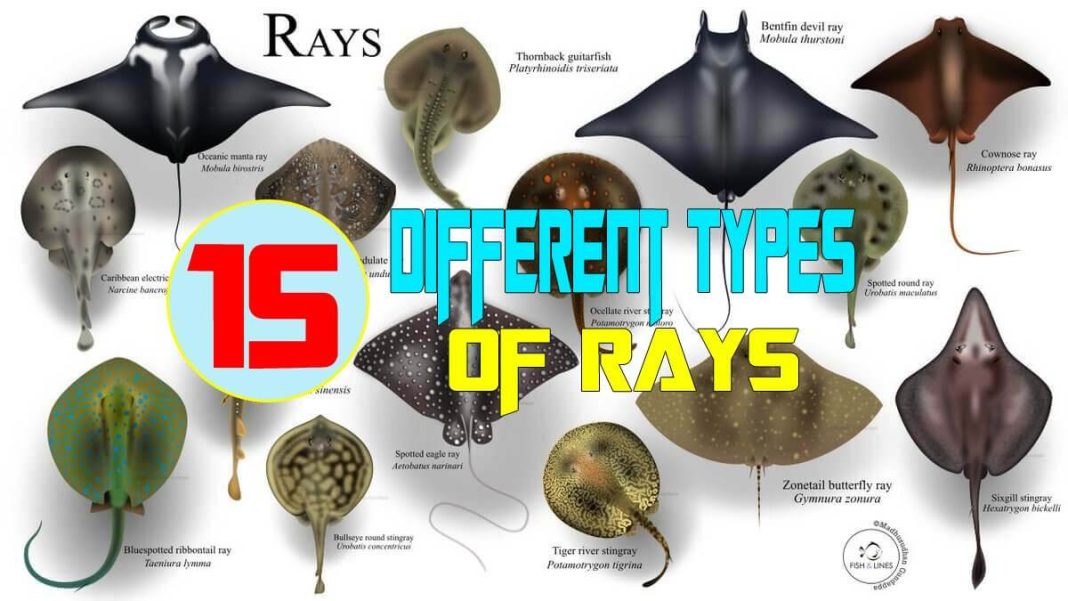 Ray is a superorder of fish from the class of cartilaginous fish. With over 15 different types of rays species, they make up more than half of the cartilage fish species. They live worldwide, in all seas, and some species are also in the deep sea. True rays (Rajidae) and trembling rays are more species-rich in temperate seas, and the rest of the families are in tropical zones. 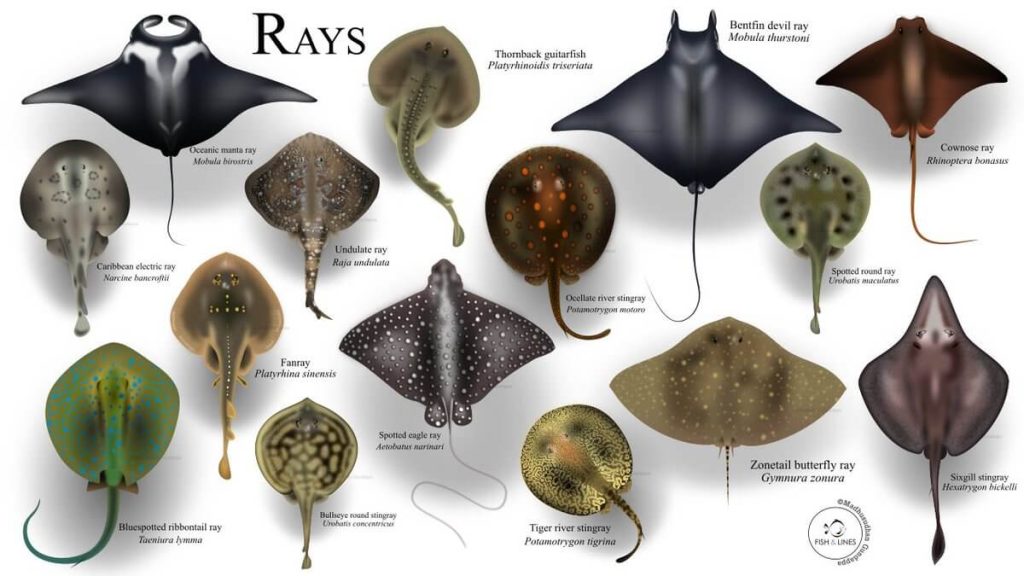 Few species of the stingray family (Dasyatidae) also go into brackish and freshwater. In South America, the Potamotrygonidae live exclusively in the large streams and rivers of the continent. There are different types of rayfish present in different parts of the world; among are the 15 different types of rays listed below:

Stingrays are a group of sea rays with wide flat pectoral fins that give them a diamond-shaped body outline. Some species have a wingspan of more than 1.5 m.

The gills located on the abdominal side are supplied with water with the help of paired breathing holes behind the eyes (on the backside). The mouth is located on the underside. Numerous blunt teeth are used to break open shellfish. 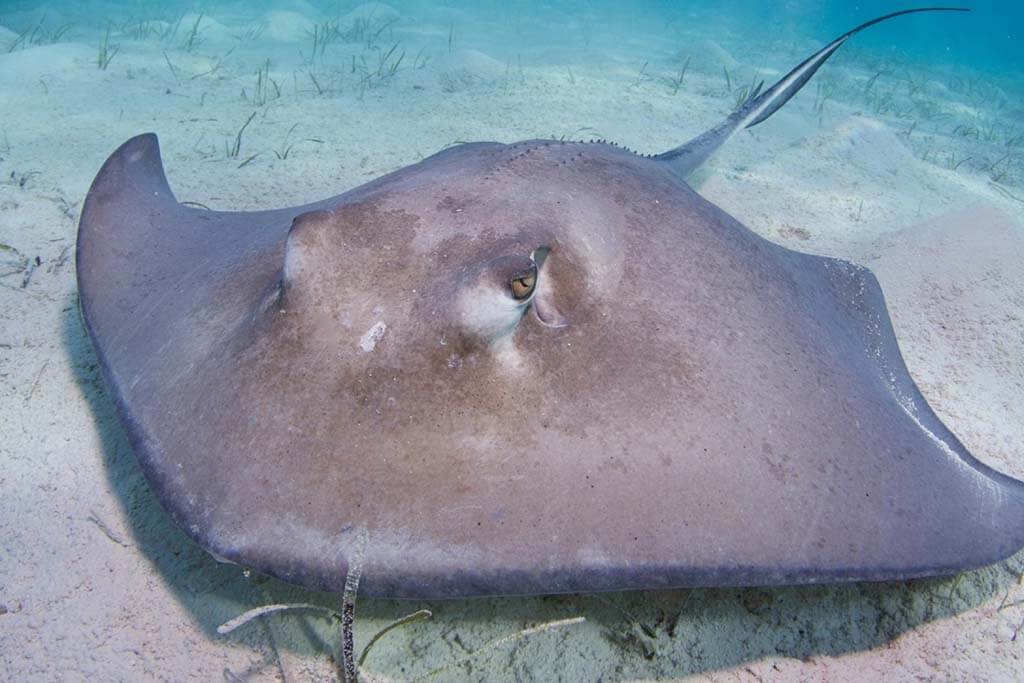 Most stingrays are found in warm, shallow waters; they penetrate more temperate regions during the warm season. These are ovovivari: the fully developed embryos hatch during egg-laying.

The skates are rounded to diamond-shaped. They have large pectoral fins extending from the muzzle to the base of the slender tail, and some have sharp “noses” created by a skull projection, the rostral cartilage. Skates can be monochrome or patterned.

Most have prickly or thorn-like structures on the top, and some have weak electrical organs (which can be used for communication) in the tail. Typical skates (Rajidae), most living forms, have two dorsal fins on the tail; The Arynchobatidae have one, and the Anacanthobatidae has none. 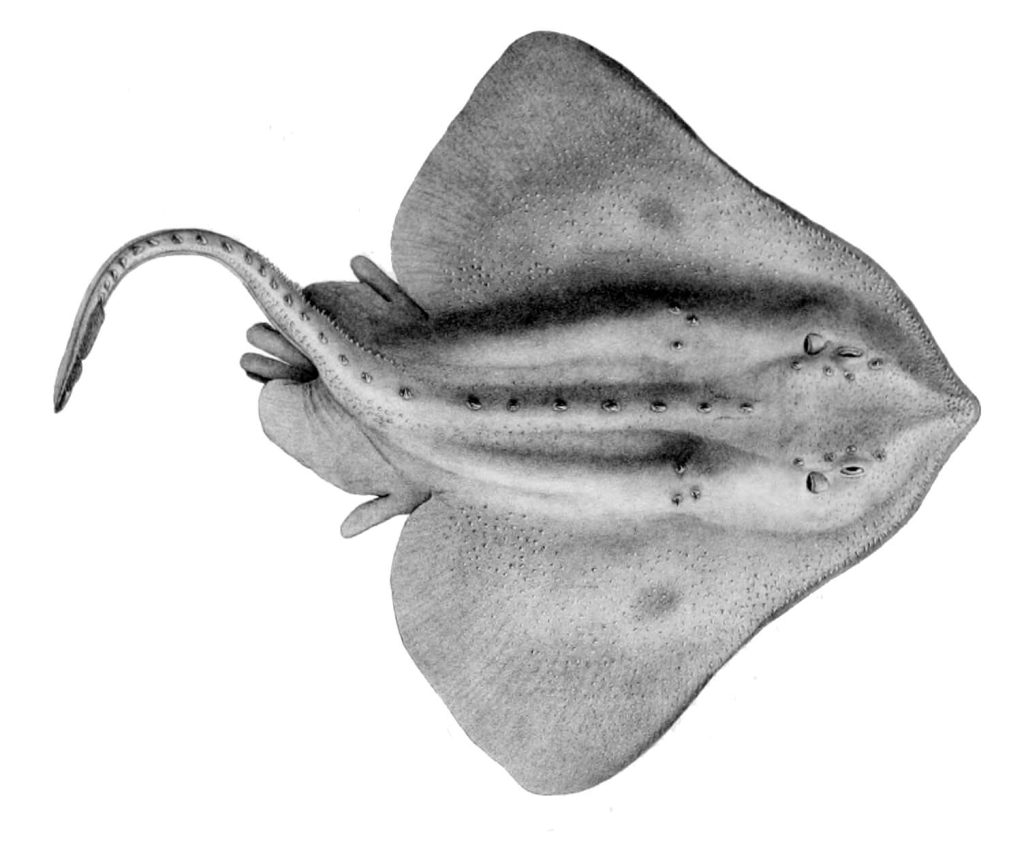 The mouth and gill openings of all skates are located at the bottom of the body, and all of them lay eggs, as far as is known. The eggs, the so-called mermaid’s purses, which are often found on beaches, are elongated and protected by leather bags.

Skates vary in size. For example, the small hedgehog skate (Leucoraja erinacea) of the West Atlantic is grown with 50 to 54 cm (20 to 21.3 inches) or less.

As already known in ancient times, these fish can generate electric shocks. However, the stimulating effect of these electric shocks to stun and paralyze the prey is limited to a few decimeters (30 to 60 cm).

Suppose a prey, usually fish, is hit by the electric shocks. In that case, they cause uncontrolled nerve impulses and muscle contractions, which hinder the prey for a short time through paralysis, anesthesia and disorientation. In addition, the electrical organs also serve as a defensive measure to confuse approaching robbers with electric shocks for a moment to escape or even drive them away.

This is one of the rayfish belonging to the family of Rhinobatidae. It matures around seven to eight years old. Males range around 90-100cm tall, and females about 99cm. They can live for 11 years old, and their adult size is around 120cm for males females can reach 137cm. 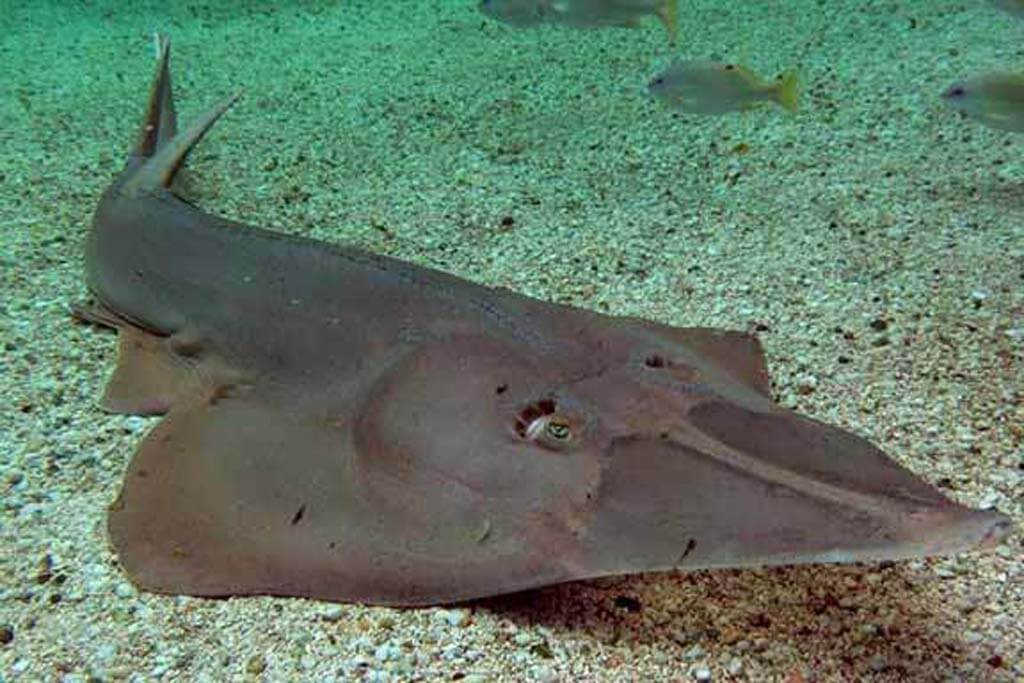 Thus, conserving this particular species needs to be taken care of to protect biodiversity. The shovelnose is thought to be a ray that is highly developed, with characteristics that are similar to sharks and Rays.

Hypnos monopterygius, also known as the coffin ray or Australian numbfish, is a species of electric ray endemic to Australia, where coastal petticoats shorter than 80m (260 ft) are common. It is the only member of its family, Hypnidae. 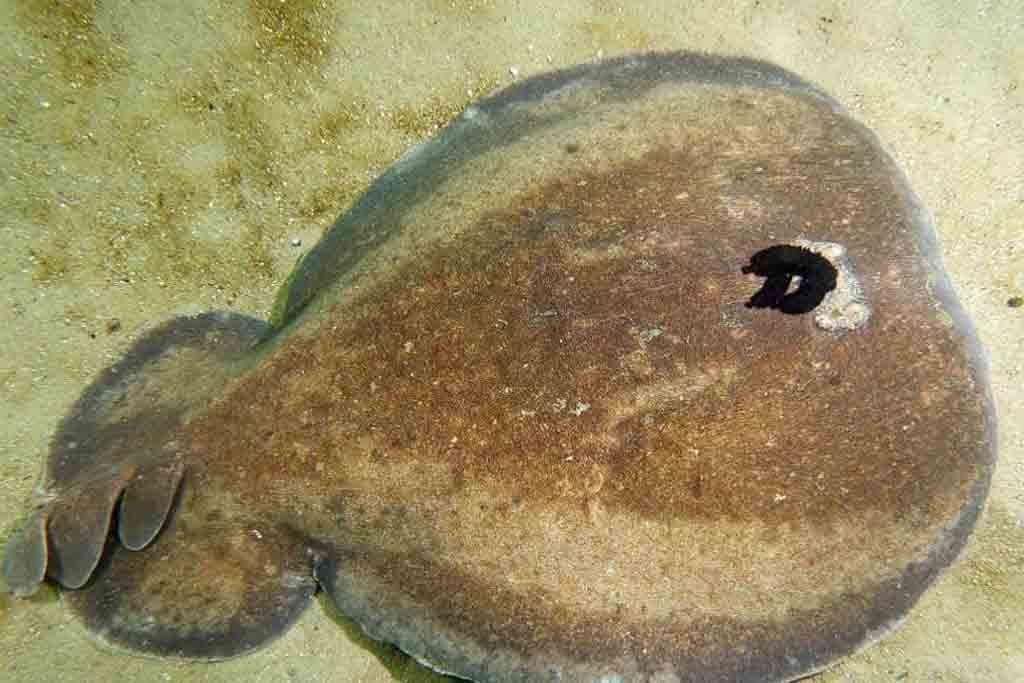 This small types of rays fish usually reaches 40 cm (16 in) in length. Greatly enlarged pectoral fins and an extremely short tail, along with minute dorsal and caudal fins, all concentrated towards the rear, give the Australian numbfish a distinctive pear-like shape. It has a variable shade of brown on top, small eyes, and a large, very distensible mouth.

Pelagic Eagle rays feed on mollusks and crustaceans, crushing their shells with their flattened teeth. They are excellent swimmers and can traverse water up to several meters above the surface. 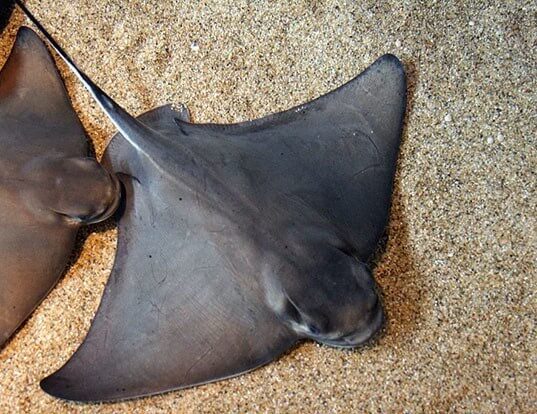 They are Whiptail Stingrays are a family of rays that belong to the family of Myliobatiformes. They are many in temperate to tropical marine environments, and a number of types of rayfish are also found in freshwaters within Africa, Asia and Australia.

Members of this group have pectoral fin discs that are flattened which range from diamond-shaped to oval. The common name is derived due to their whip-like tails which are significantly larger than the disc and are devoid of caudal or dorsal fins. 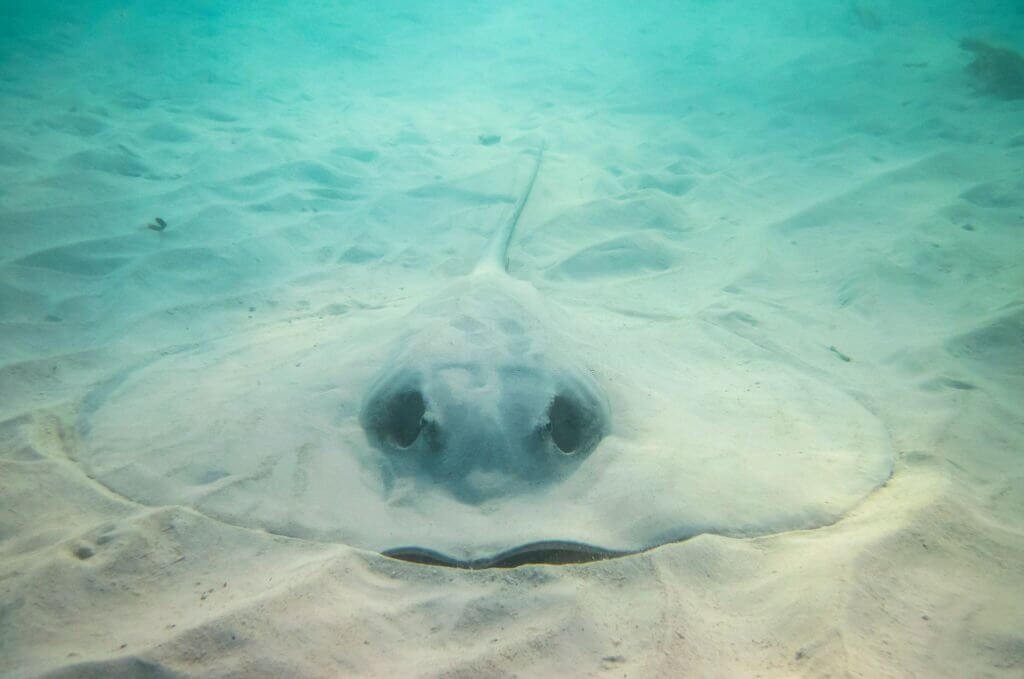 Whiptail stingrays in all forms, with the exception of those with porcupine-like rays (Urogymnus asperrimus) are armed with one or more poisonous stings at the bottom of the tail, that are used to defend. Their sizes range between 0.18 to 2.0 meters (0.59 to 6.56 feet).

This is an adult animal of about 2 meters in size, whereby the butterfly rays can reach a size of up to 2.1 meters; it is assumed that the genus of them is Gymnura Altavilla, which occurs in the Canary Islands, can also reach a size of 4 meters. 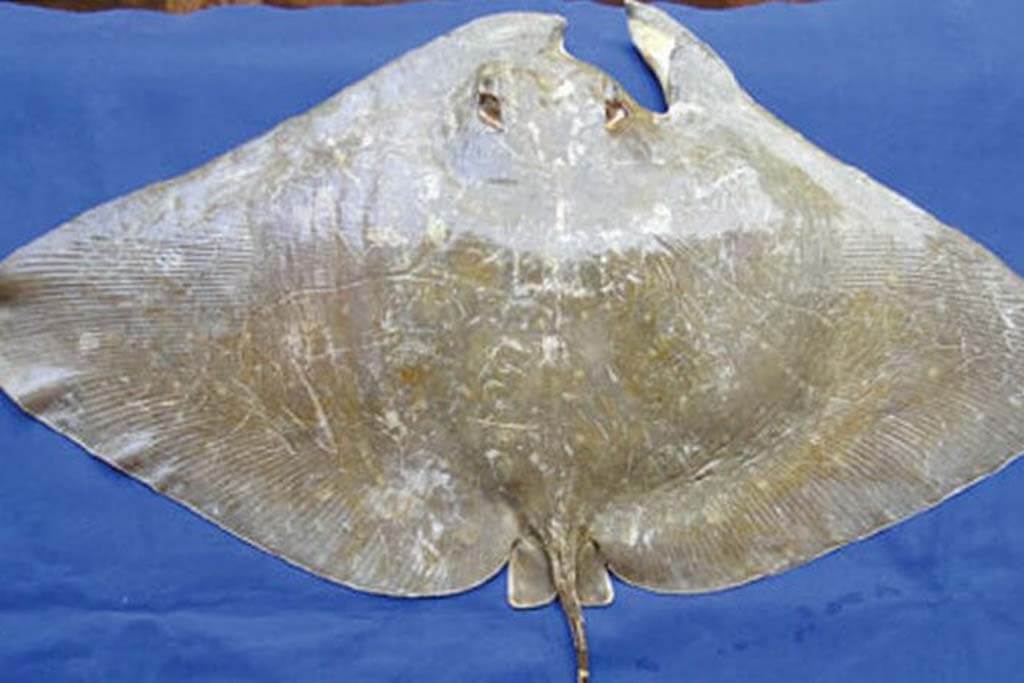 Butterfly rays have a flat body with pointed fins. They are triangular, even if the rear flights do not lead entirely at right angles back to the body. The tail is relatively small, and they have a light brown colour, whose darker contrasting pattern is reminiscent of marble. These fish of the Canary Islands do not have a dorsal fin.

The sixgill stingrays or commonly called the reed. It is so named for having six gills, unlike most sharks that only have five. Some scientists think that the sixgill would serve to oxygenate muscle tissues better.

The cañabota is a shark that lives in the deep sea. Its distribution is quite wide from tropical to temperate seas, including the Mediterranean, particularly in the Strait of Messina. Here the currents are quite strong and create a phenomenon called “upwelling”, that is to say, a rise of nutrients from the seabed to the surface, and that is why these sharks are found in these nutrient-rich waters. 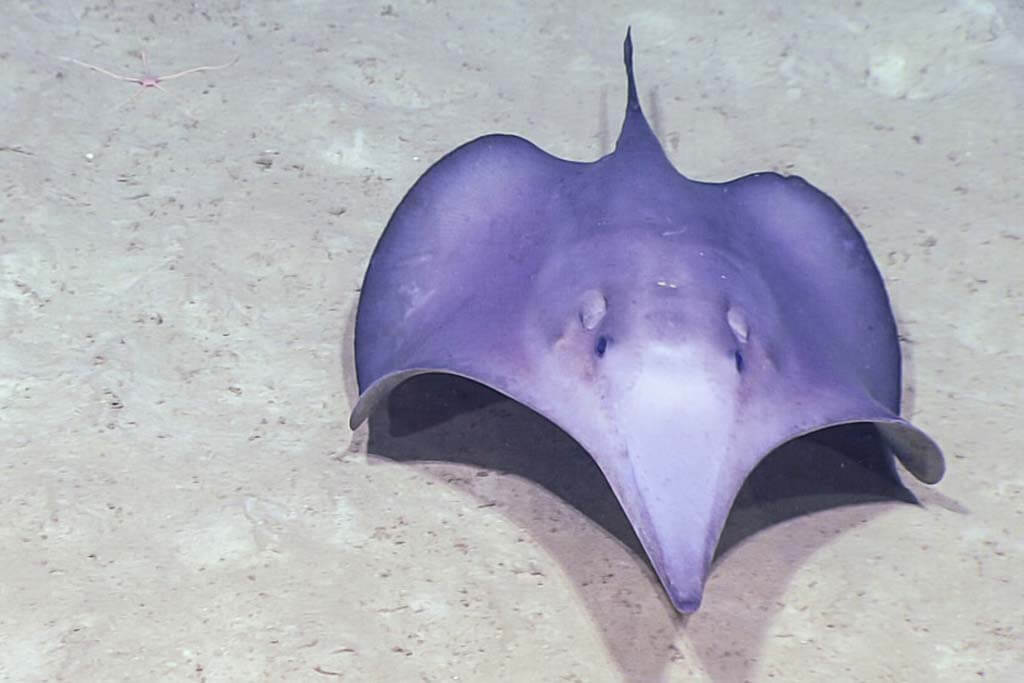 Sixgill stingrays can live up to 1,800 m deep but can be found diving between 30 and 90 m. The reason for their vertical migration to the surface is not well known, and it is thought that it is to be able to feed during the night and descend to the deep sea during the day, where they spend most of the time. They are carnivorous predators, feeding mainly on cephalopods, crustaceans, fish, rays and some marine mammals.

These rays are often solitary and travel alone, but most types of rayfish display aggregative and schooling behaviour associated with feeding and reproduction. 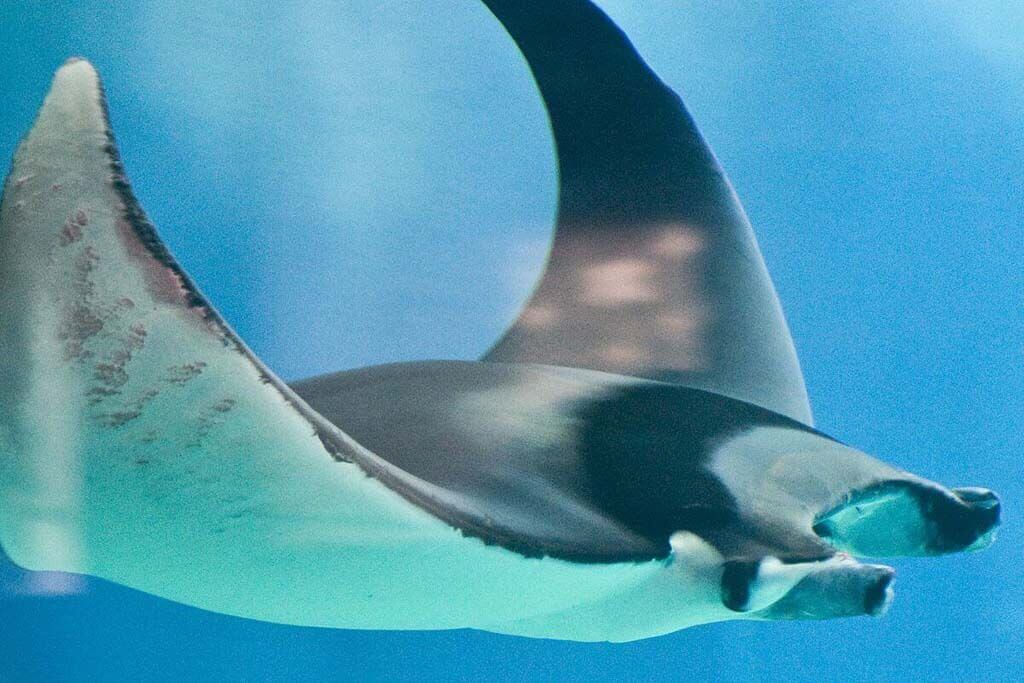 The large, round nostrils of the Giant Stingarees are near the mouth with which a pair of wide grooves connect them. There is a wide skin curtain between the nostrils with a firmly hemmed rear edge. 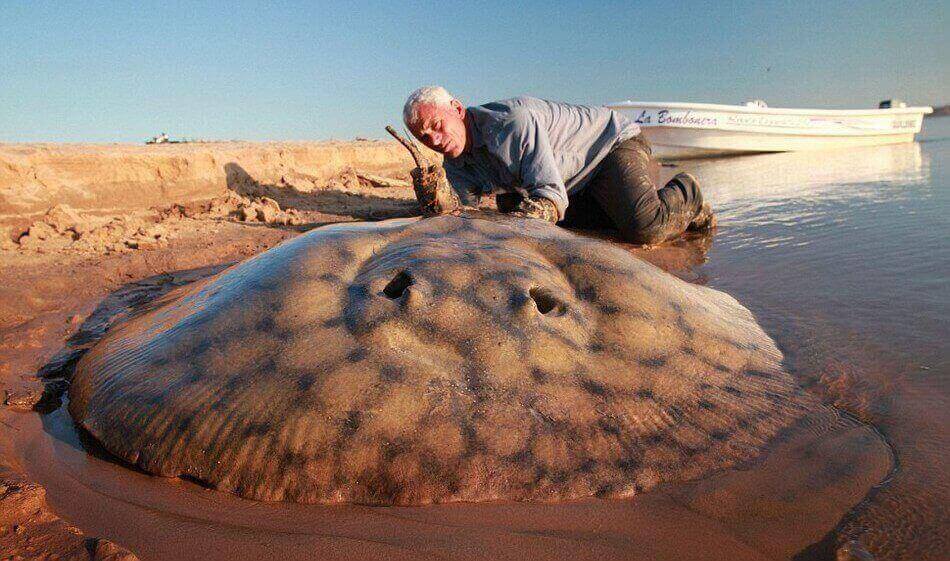 The Giant Stingarees are widespread in the Indo-Pacific: South Africa, Mozambique, southern India, east of the Philippines, north of Japan and south of Australia. Occurrence in the Hawaiian Islands has also been reported (39 ° N – 37 ° S, 20 ° E – 154 ° W).

It is an genus of freshwater neotropical fish belonging to the family of Potamotrygonidae (order Myliobatiformes). They are found in all states in South America, except Chile.

Neotropical Stingrays  lives in central, northern, as well as the eastern region of South America. They are found in the rivers that flow to the Caribbean Sea and the Atlantic Ocean that extend southwards towards south to Rio de la Plata between Argentina and Uruguay. The majority of animal is native to specific river basins. The largest variety in river rays are located within the Amazon basin.

The Neotropical Stingrays are almost circular form and vary in dimensions from only a few decimeters all the way to the shorter-tailed river line. A few of the specimens be as large as 2 meters in diameter. The upper part of the surface is covered in the denticles (scales which have tips that resemble teeth).

The majority of species are brown or greyish, and usually have distinct patterning, either mottled or spotty however some types of rayfish are blackish, with black spots that contrast.

The Cownose Rays live pelagically in tropical and subtropical regions of the Atlantic and Indo-Pacific. In their form, they resemble the strange heads of Eagle rays, to which they belong.

Cownose Rays can be easily distinguished from other types of rayfish on their double-humped snout with the striking notch. They have a flattened, diamond-shaped body with wings that are too pointed. Formed pectoral fins that are significantly wider than long, and a long, whip-like tail. 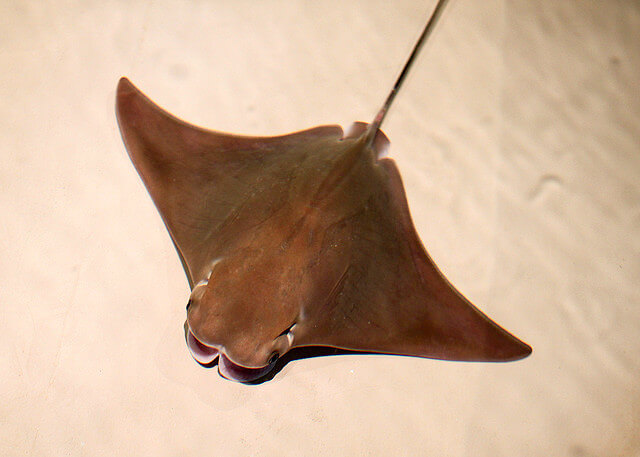 The lower and upper jaw are covered with flat teeth that form a flat chewing apparatus. The teeth are strong and designed to crush shellfish. In the Atlantic Kuhnasenraen, the males can reach a width of 90 cm, the females 70 cm. The animals are coloured brown or olive on the top, white or yellowish-white on the underside [2; 6].

This family previously included the American genera Urobatis and Urotrygon, which are now recognized as forming their own family, Urotrygonidae. Stingarees are found throughout the Indo-Pacific region, with Australia having the greatest diversity. They are bottom-dwelling, slow-moving fish that have been observed from nearshore shallows to deep waters above the upper continental slope. 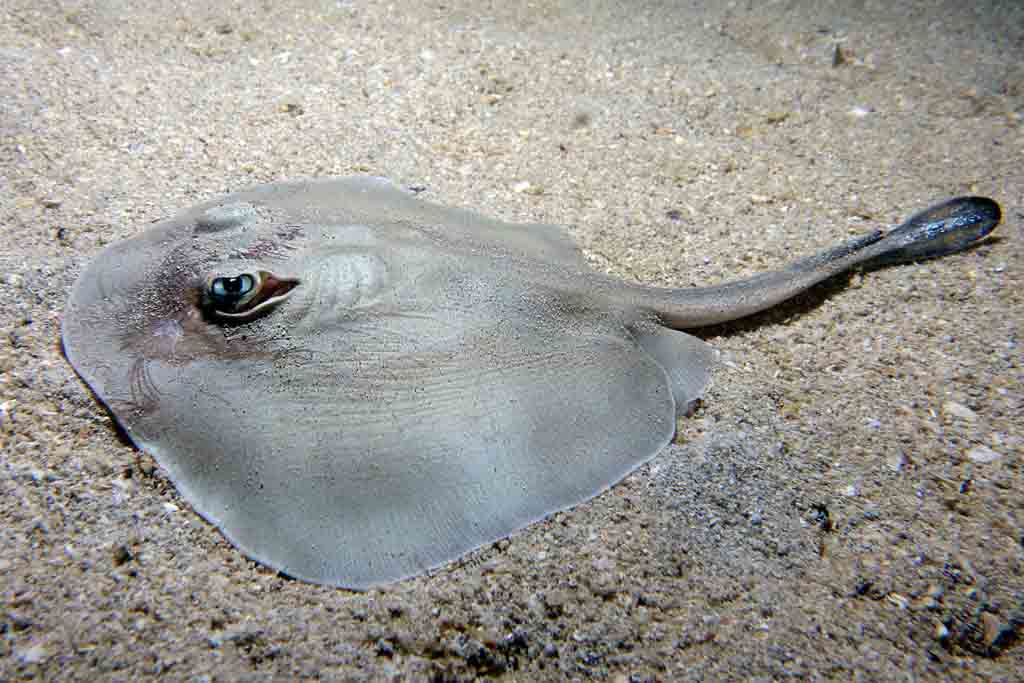 These rays, which range in length from 15 to 80 cm (5.9 to 31.5 in). Have oval to diamond-shaped pectoral fin discs and relatively short tails that end in leaf-shaped tail fins. They may also have small dorsal fins and lateral skin folds. The majority have smooth skin, and some have ornate dorsal color patterns.

The round stingray has an oval disc shape rather than an angular diamond shape. This is a small stinging type of rayfish found on sandy coasts of the eastern Pacific Ocean.

The brown colour and lighter spot patterns blend in well with the environment. They often bury themselves in mud or sand and can be challenging to spot. Accidentally standing on one often leads to a nasty sting. 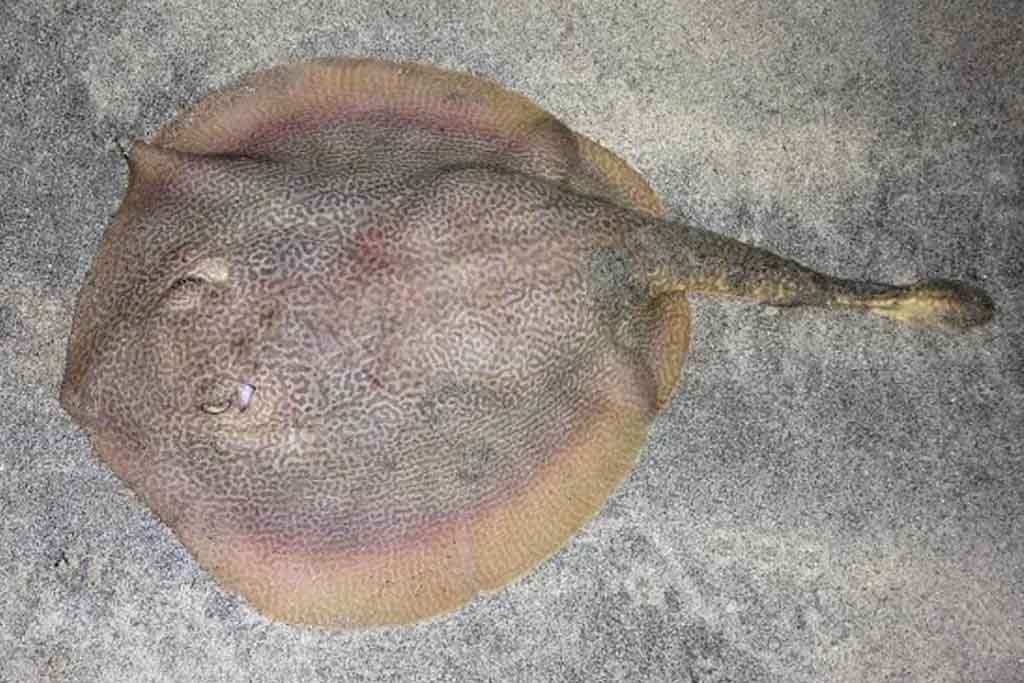 These small stingrays usually do not have a disc width of more than 30 cm in women and 25 cm in men. You can also recognize them by its protruding eyes, not its yellow-brown colouration and small size.

CONCLUSION about Types of Rays

As we get to the bottom of the listing, you should have gotten some information about rays and different types of these fish we can find in the sea. So utilize the information as your best wish.

FAQs about of Rays.

What do rays eat?

It is omnivorous and eats smaller fish, crustaceans and remains that remain on the bottom of the sea, where it usually always is.

Where do rays live?

They live in salt and fresh water, and we can find them in sand and rock bottoms.

How long do the rays live?

This is a long-lived and slow-growing species. They can live up to 50 years. Although they are very lonely, they only meet during the mating season, and their pregnancy can last up to a year.