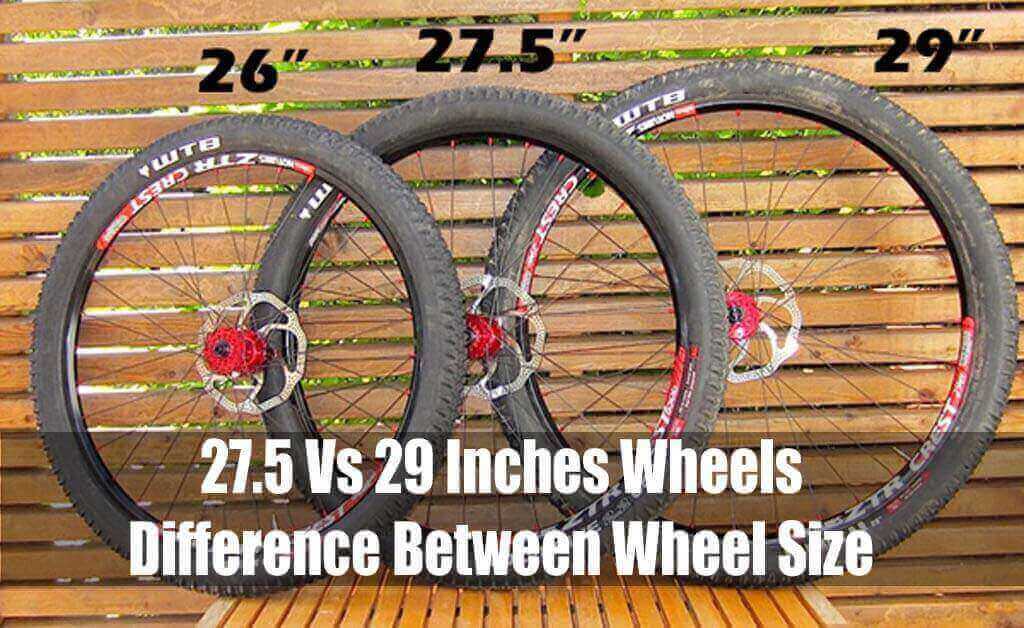 If you have plans to buy between 27.5 vs 29 inches wheels, this guide is for you as we’ll bring the major difference between them. This will help you choose the best that meets your demands. 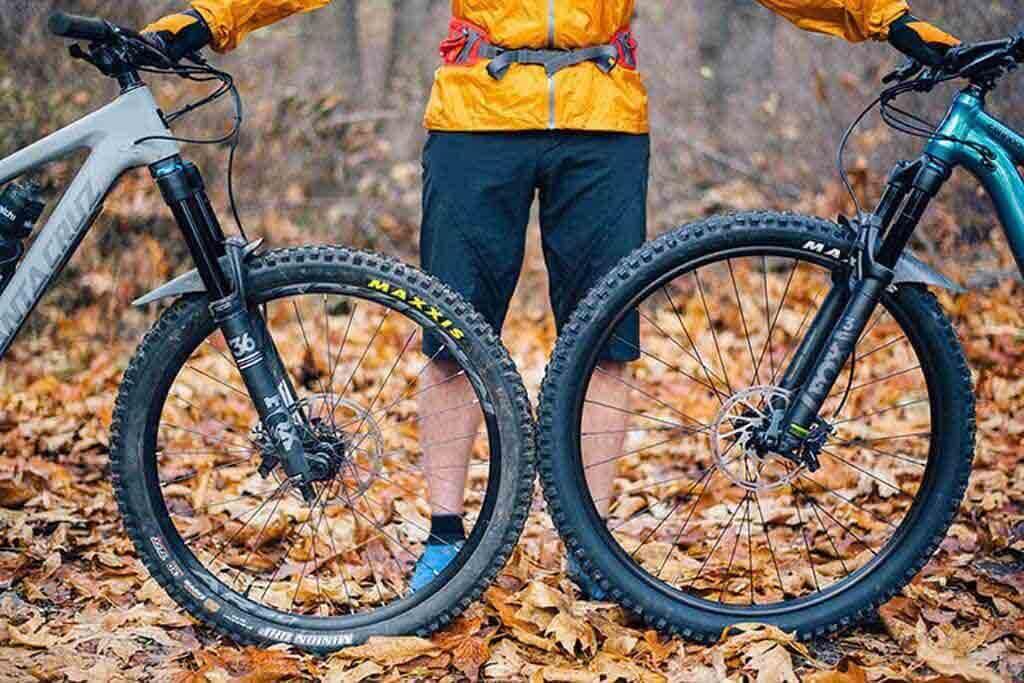 What Is A 27.5 Inch Mountain Bike Wheel?

A mountain bike with 27.5 inches diameter wheel is referred to as a size 27.5 or tweener/ 650 bob. The 27.5-inch mountain bike wheels best suit a shorter person. This is because it has a smaller tube stem and chainstay. It maneuvers and accelerates faster.

It best suits cyclists who like adventurous rides on bumpy terrain along the woody areas. It’s a popular choice for both recreational riders and pro racers. Kirk Pacenti designed these wheels in 2007 when he was looking for a better way to benefit from the available wheel sizes. 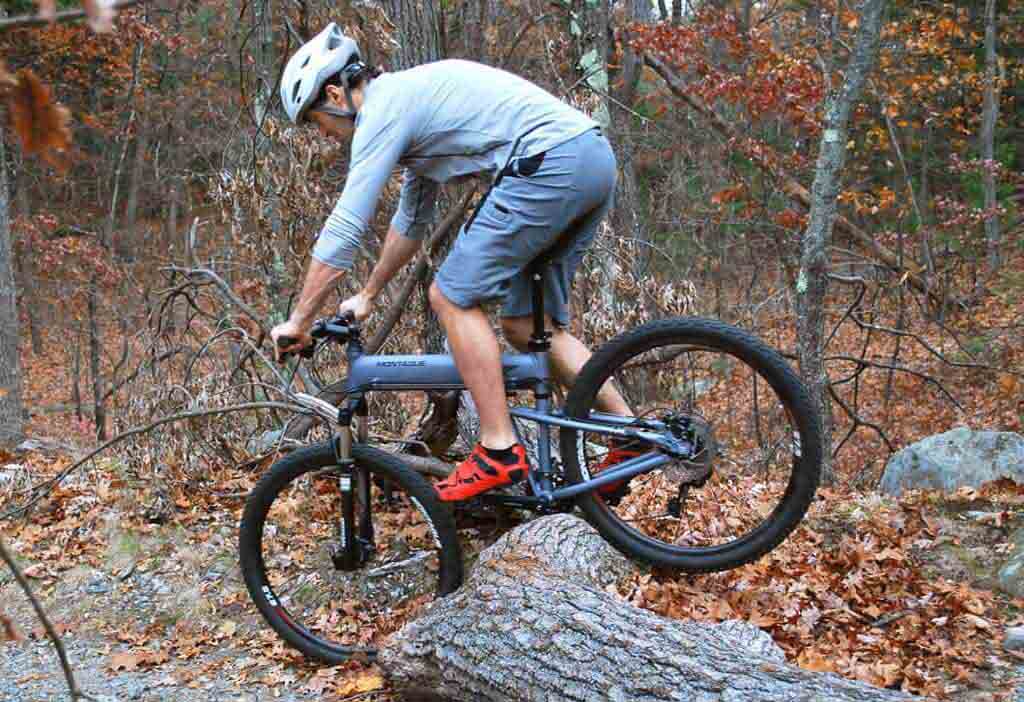 However, it became famous in 2010 during the biking season and in 2012 when Nino Shurter used it for a competitive world cup in South Africa. After that, more manufacturers decided to produce this bike wheel size, seeing its popularity rise.

Maybe you also like: Mechanical Vs Hydraulic Disc Brake: Understanding the Difference

The 27.5-inch wheels are ideal for short riders who like playful and maneuverable riding styles at high speeds. It’s also a good pick for cyclists who love bike parks, jumps, or freeride terrains. It works best with long travel frame bikes, which are ideal for those who like riding on rugged trails. This is because it’s stronger and easy to maneuver than the bigger sizes.

This is another size of mountain bike wheel you can use instead of the 27.5-inch wheel. It’s the biggest wheel size in the market currently and comes with many benefits. It has a long chainstay and forks. When paired with the right geometry and chassis, it’s a fast, smooth, and highly maneuverable wheel. 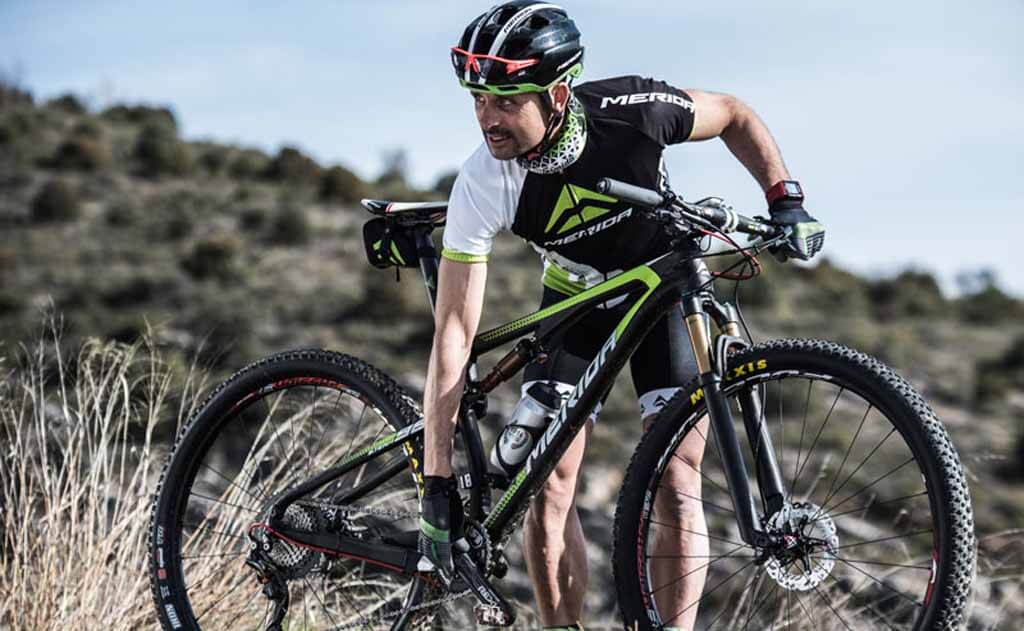 But they tend to be heavier than the other sizes. The 29-inch wheels came to the market in early 2000 and gained popularity because of the cross-country riders. When still new, it has challenges like being sluggish, poor tire clearance, and riding position, which has since changed.

Maybe you also like: How To Drift A Mountain Bike: Crossing The Line Of Traction

Who Should Ride A 29-Inch Wheel?

The 29-inch wheel size is ideal for any rider who wants to enjoy riding uphill or downhill at maximum speed. It’s also a perfect pick for riders who want to be updated with technology. It will enable you to ride at cross country competitions at high speed. This wheel is also suitable for technical trails and helps you not feel fatigued while riding long distances.

Most downhill riders prefer this wheel as they feel it’s faster and smooth with good grip, allowing them to be in control and brake faster. The 29-inch wheel is believed to boost stability, confidence, and speed, a reason why its gaining popularity.

Before buying 27.5 vs 29 inches wheels, it’s good to know their differences to make an informed choice. The main difference between the two lies on;

An attack angle is an angle your bike’s wheel creates when it’s in contact with a square object. Your bike’s wheel should make a shallow attack angle as it will easily roll over objects. The 27.5-inch wheels have a poor rolling capability over objects than the 29-inch wheels. So, it requires you to select the kind of trail you’re going to ride on. for example, if you’re going to a smooth terrain, the 27.5 inch is a good choice.

However, the 29-inch wheels create shallow attack angles, enabling them to roll over bigger logs, rocks, or roots on the trail. Your confidence level increases when riding on a path with several obstacles as this wheel has your back.

The 29-inch wheels won’t accelerate faster because its much weighty. The weight of the rims, tubes, and tires is far away from the wheel’s center. This makes it have a higher rotational mass which slows down the acceleration rate. The low acceleration makes it take longer to move at a fast speed making the bike have an unresponsive feel. But they’re ideal for longer rides where you don’t have to put in much effort to keep the right momentum.

Another difference between 27.5 vs 29-inches wheels lies in who can use them. The 27.5-inch wheel best suits a shorter person who is less than 5 feet tall. This is because they’ve got a shorter chainstay and smaller tube stem.

The 29-inch wheel is suitable for tall riders as it’s bigger, requiring a longer frame which affects the bike’s geometry. A shorter rider will find it challenging to cycle comfortably on such bikes with bigger wheels. Go for a test ride to know which wheel size fits you between 27.5 vs. 29-inch wheels. But if you’re taller, you can ride both the bike with 27.5-inch and 29-inch wheels.

The 27.5-inch wheels are lightweight. On the other hand, the bigger 29-inch wheels are heavier than the 27.5 ich with about 2lbs. this is because it has more wheel material and tire rubber. The wheel’s weight might not be a major factor for a casual rider, as the traction and attack angle are.

However, it does matter if you’re going for long-distance travel or expect to engage in a competitive race. This is because the weight might weigh you down. If you want to reduce the weight of a 29-inch wheel, it’s best to opt for a tubeless wheel which will also improve its acceleration and traction level.

Therefore the 27.5-inch wheel is a good pick if you like riding on tight and twisty terrains, which makes you enjoy the snappy feel. However, the 29 inches are good if you intend to cycle on a bumpy trail with more obstacles since it enables you to conquer them instead of looking at how to maneuver around them.

Maybe you also like: How To Fix A Broken Chain

Your choice between the 27.5 vs 29 inches wheels will depend on what you want to use them for. If you’re a recreational rider, who’s out for fun, the 27.5-inch wheel is a good pick as it will enable you to enjoy such rides. This wheel size is also perfect for shorter people who don’t want to strain while out on the trail.

However, the 29-inch wheel is suitable for riders who like riding on tough trails with roots, rocks, and bumps. This is because it has a shallow attack angle which improves your confidence. It also has a good traction level attributed to the large surface area. You can ride a bike with such a wheel on slippery surfaces without worries of falling. But they will take longer to get up to speed because they’ve got low acceleration which can inconvenience you if you want to ride high, steady speed.

What Makes The 29-Inch Wheels a Popular Choice?

Even though the 29-inch wheel has been in use for some years now, it started gaining popularity after dominating gravity riding. In 2017, Santa Cruz introduced the world cup downhill race and introduced the 29er V10 downhill bike.

Maybe you also like: How To Build Mountain Bike Jump

There’s a major difference between 27.5 vs 29 inches wheels. The 27.5-inch wheel best suits a shorter person. It has faster acceleration, more maneuverability, and is lightweight. However, the 29-inch wheels have better traction and attack angle and fit taller riders. Before you choose any of these wheels, you should understand what you want to achieve with them and the best trail to use them on.