Knowing how to identify White Perch vs White Bass will help you to catch more fish! This article will cover how to spot these fish, their habitats, and the differences in body pattern. 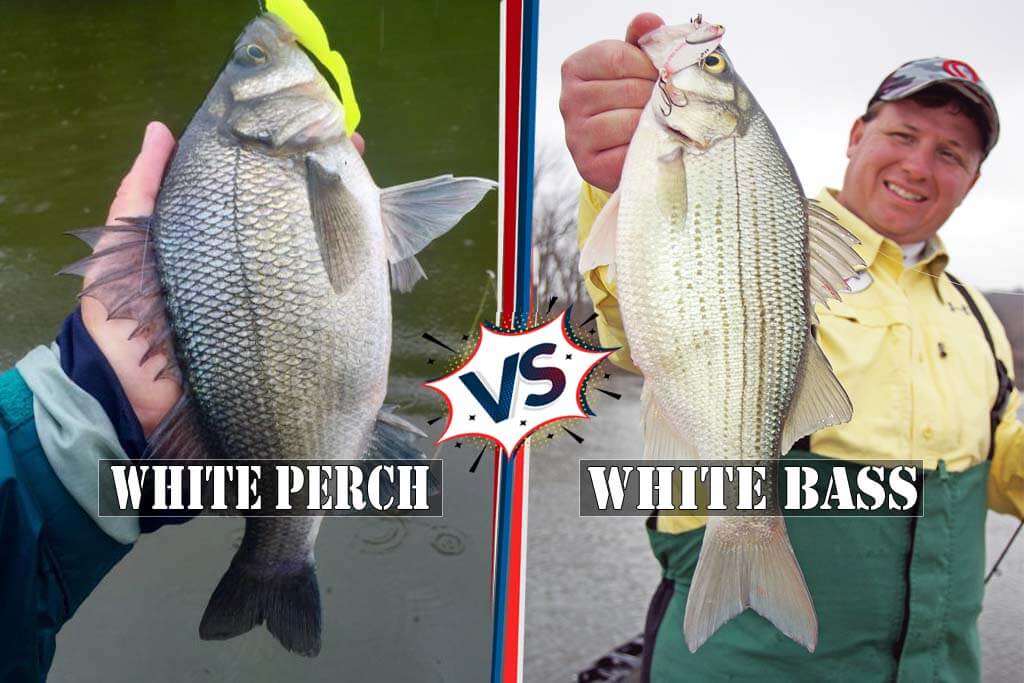 Keeping a look out for these fish is crucial for successful fishing! Whether you’re a beginner or an experienced angler, you’ll be able to identify these fish in no time! Continue reading to learn how to distinguish between White Perch and White Bass!

How can you differentiate between White Perch and White Bass? Both white bass and white perch have flat, horizontal stripes along their sides. They also have spots on the back that are unequally distributed. White perch are best fished during the spring migration. They are similar in appearance and do not reach massive sizes. 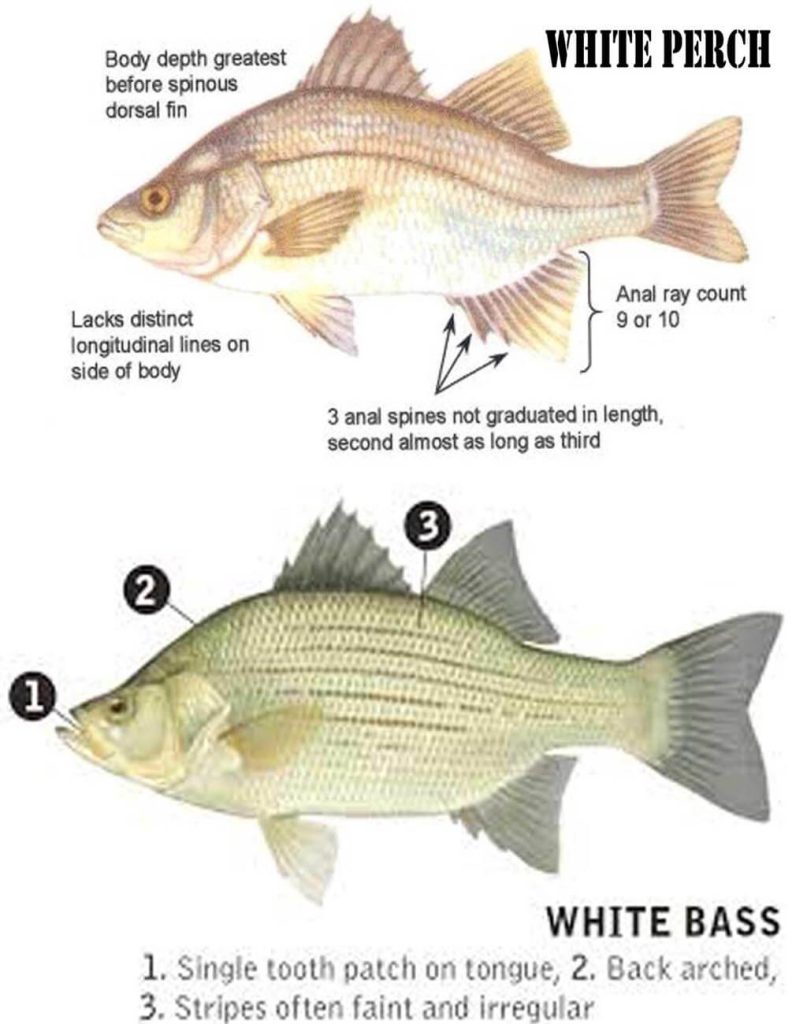 Both have silver bodies. They are both members of the family Percichthyidae. Both are related to the striped bass and sea bass. The white bass is larger than the white perch. It can grow up to ten inches in length, while white perch will only reach five to seven inches.

The fins of both species can help you determine which fish is which. White perch has a spiny dorsal fin, while white bass has an erect rear fin. If it’s larger than 12 inches, it’s probably a bass. These two species are closely related, but their habitats are different. When identifying white perch from its habitat, keep these facts in mind.

When identifying which is the right fish for the right habitat, you must first identify the species. White bass and white perch are both freshwater fish, although their habitats are different. White perch are more common in lakes and reservoirs, but are not as popular as other species. Because they are smaller, identifying them can be tricky.

The first thing to know about white perch is where they spawn. White perch prefer freshwater bodies, such as ponds, streams, and lakes. They are highly adaptable and can reproduce in saltwater or freshwater bodies. They can even live in fresh or brackish water. Because they can live in different water bodies, they have a variety of habitats that are perfect for their spawning.

The second thing to know about these fish is their habitats. The White Perch lives in slow-moving waters that are brackish. Their habitats are brackish backwaters, coastal streams, and even landlocked lakes. They do well in medium-sized lakes and ponds, where they often hold on the bottom. So, when deciding where to fish, you should know the characteristics of the species in your area.

While white bass and white perch are both members of the same family, they’re actually quite different. Although they share similar traits, white perch is much smaller than its larger cousin. These fish both belong to the same genus, Moronidae, which includes the striped bass and the silver bass.

If you want to learn more about fishes, you should know the differences between the body patterns of white bass and white perch. Both white bass and white perch are silver-colored fish. Because they are similar in color and similar in body structure, you can’t be able to differentiate them easily. But, if you’re not sure, here are some important differences between the two:

While both species are fine freshwater fish, there are some distinct differences between white bass and white perch. Firstly, they both swim in schools. Secondly, the bodies are similar, and they’re often mistaken for each other. That’s one of the reasons why catching them is such a challenge! But with the proper knowledge and the right tackle, you can separate the two easily. Listed below are some features that distinguish them.

The debate between white perch vs white bass isn’t entirely without merit. Both are semi-anadromous fish, spending about equal amounts of time in the ocean and freshwater. Despite their similarities, the two fish have a vastly different life history. In contrast, white bass spends about 60% of its time in the ocean and the rest of its life in freshwater. As such, they have different life histories and are thus not a direct substitute for their larger cousins.

The difference between the two fish lies in their fins. White bass have a spiny dorsal fin, while white perch have an erect rear fin. The white bass is the more likely culprit if you catch one over 12 inches. However, since only one species lives in the same habitat, you should take the white perch’s size into consideration. And remember: if it is larger than 12 inches, it’s probably a bass.

While both species are similar in size, the difference between a white perch and a white bass is significant. White bass are larger than white perch. This makes them a better choice for eating. If you’re unsure of which is which, read on to learn how to tell the difference. Besides size, you may also want to look for white bass’s distinctive stripes.

Although the two species are similar in size, their bodies are completely different. White perch grow to about 15 inches and weigh between two and three pounds. In fact, the world record for a white perch was caught in Massachusetts in 2016, weighing 3.8 pounds! White bass travel in schools and chase baitfish throughout the year. While white bass grow faster and larger than their peers, their bodies are much different.

There are some subtle differences in the dorsal fins of the two species. While both species have a flattened dorsal fin, white perch has a softer, spiny one. The two fish also have contrasting fin colors and textures. While most people like white perch, it is possible to find a bass that tastes more like a white perch. White bass fins are less distinct, and most people prefer them for their flavor and texture.

The difference between the white perch vs white bass fins can be attributed to the way they feed. While white perch typically feeds on fish eggs, they will also eat the young of other species. In Chesapeake Bay, white perch eat grass shrimp, juvenile bass, and razor clams. During the summer, white perch also eat tiny crustaceans, insects, and zooplankton. Their diet is extremely diverse and varies depending on where they are living.

The dorsal fins of both species help determine which one you are fishing for. The fins of a white bass are longer than that of a white perch. White perch are much more common in a freshwater setting. white bass share a similar habitat and are easily distinguished by their fins. For this reason, it’s important to know the difference between the two before you go out and purchase a tackle set.

How to Fish for White Bass and White perch

If you want to catch big bass, white perch, and other similar species, you need to know how to fish them. These fish typically hold near the bottom and can be aggressively chased with lures. You should cast lures close to the bottom in order to get a strike. A good method for targeting them is trolling. Once you find schools, you can concentrate on the area where you hooked a fish. 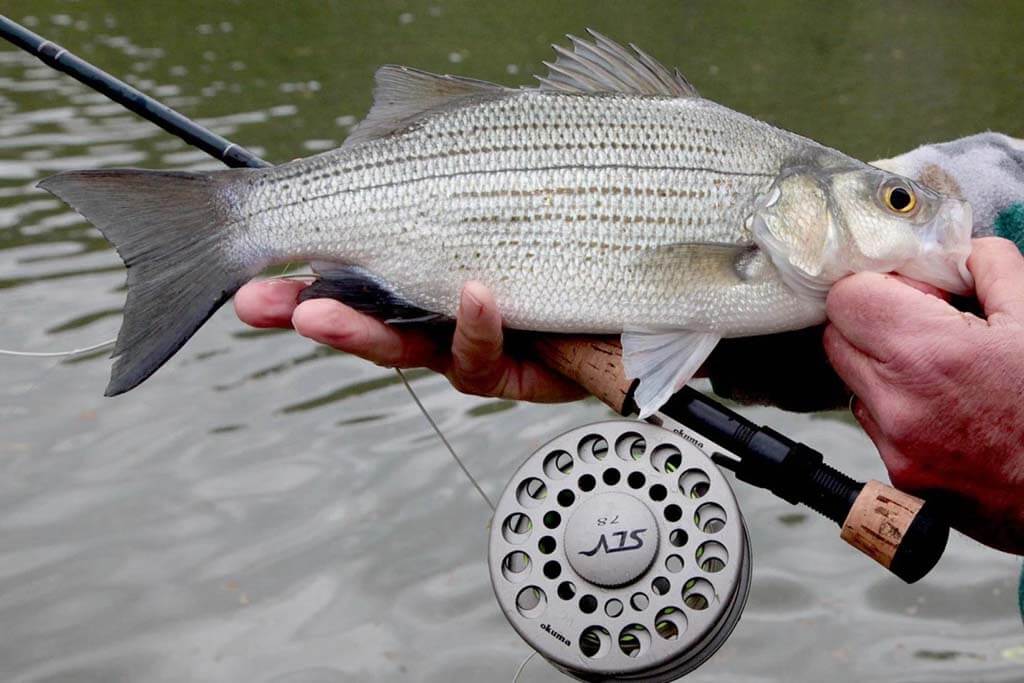 The best technique for catching these two types of fish is to fish with a lure that will attract both. Perch feed on plankton, bugs, and other foods, so a lure that mimics these foods will catch them. A lure with a small smelt in the middle can also be effective. Once you’ve located a school, fish for a few hours.

When it comes to the flavour of eating fish, you may be wondering which one tastes better, White Perch or the milder White Bass. Both have similar textures and meaty, oily flavours. The biggest difference between the two is the amount of fish in the flesh. White perch has a slightly sweeter taste and a firmer, flakier texture. It is also less fishy than white bass. Whether you prefer to eat fish with a stronger flavour or a milder one depends on your personal preference.

The flavour of white perch differs slightly from that of white bass, but they have similar textures and are equally safe to eat. White perch is plentiful around the Chesapeake Bay area, making them easy to catch in all seasons and easily frozen. Their similar taste makes them an excellent option for people who prefer freshwater bass to saltwater perch. If you’re looking for a tasty alternative to white bass, you can opt for other types of fish like salmon, tilapia, lake trout, and snapper. 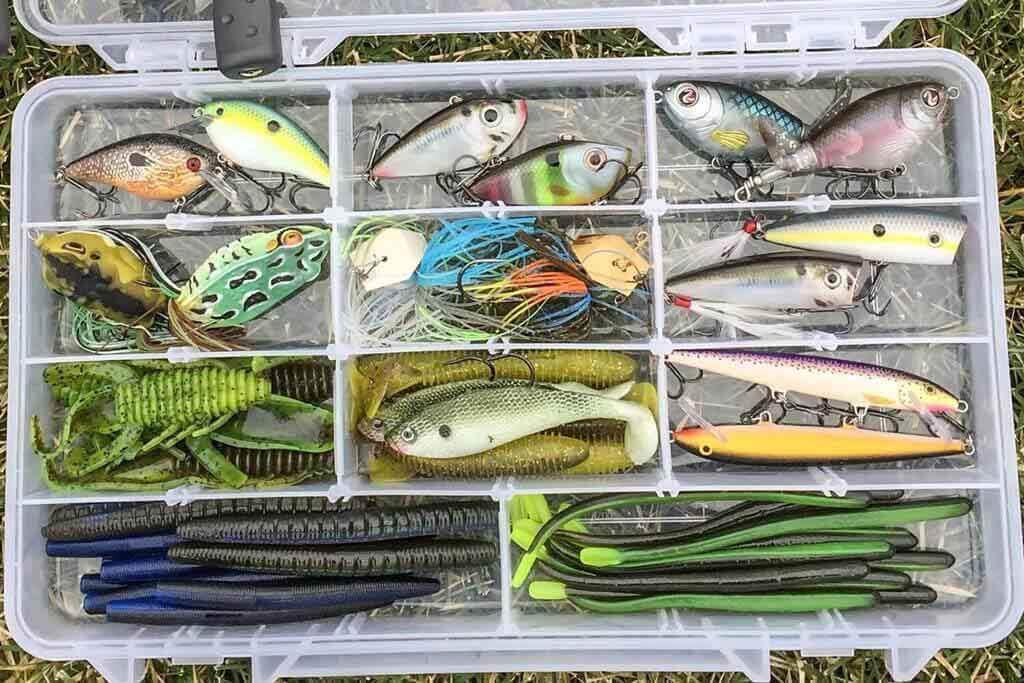 If you’re unsure about the difference between white perch and white bass, try the fin test. To determine which species you’re fishing for, lift each fish’s dorsal fin and compare it to the other. The white perch’s first dorsal fin connects to its soft dorsal fin. White bass’ dorsal fins are separate, and do not erect at the same time.

Comparisons between white perch and striped bass reveal several differences and similarities. Although they spawn together, white perch behave differently than white bass in several important respects. For instance, white bass exhibit a behavior known as male attending, whereby a male follows a female for a long time and occasionally contacts her with his snout to indicate impending spawning. Contrary to the behavior of white bass, white perch do not display this behavioral trait.

White Perch are similar in appearance to young white bass, so a mistake can be easily made. White perch are sometimes listed as invasive species in different states. Check Fish and Wildlife website to determine if your locality has laws against their possession. Some states have laws against angling for live white perch, so be sure to research your state’s laws before going fishing. If you find out that white bass are invasive in your area, do not bring them home!

Tiger Sharks Vs Great White- Which is more dangerous?