The difference between Schrader vs Presta is that Schrader valves are thicker and shorter than Presta. However, the Presta valve is more expensive, works only on bicycles, and is not replaceable.

If you’re still new to the cycling world, there are certain parts of the bicycle that you may not understand or pay much attention to. Valves on bike tires are some of the small parts which will take you time to understand how they work. These valves play a crucial role on the bike, and if it fails to work will cut your fun short. 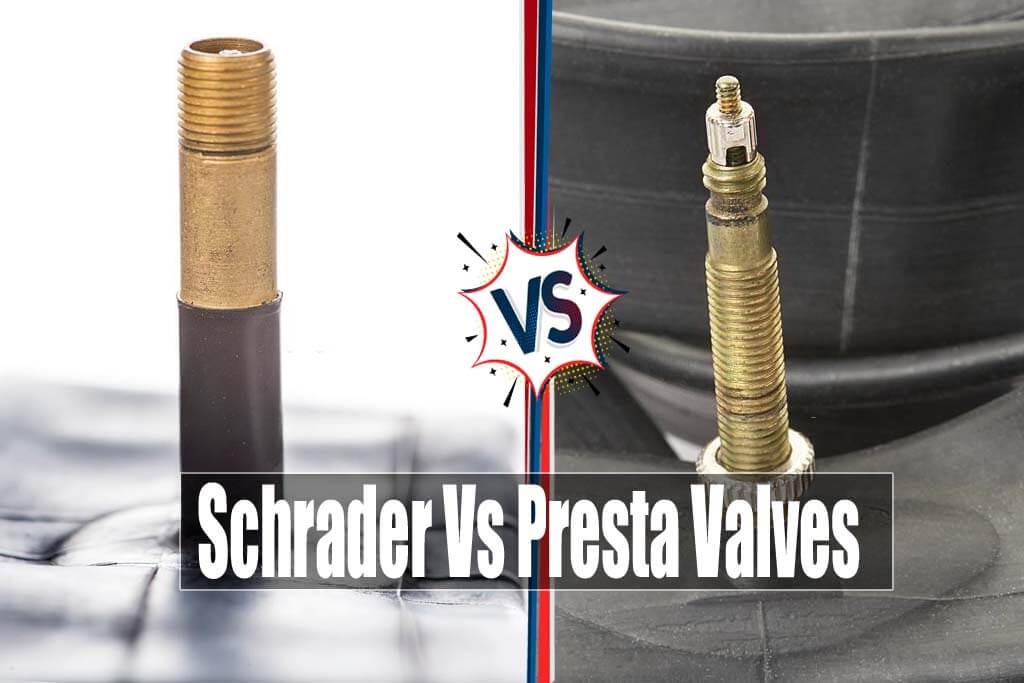 There are two types of valves on modern bike tires; Schrader and Presta. But what’s the difference between Schrader vs Presta valves? Schrader valves are thicker and shorter than Presta. Additionally, Schrader valves can be used on cars and bikes while Presta is strictly for bicycles, more so the expensive types.

If you’re planning to buy any of these valves, this guide will help you choose the right one for your bike’s wheel, as we’ll compare the two here.

What Is a Schrader Valve? 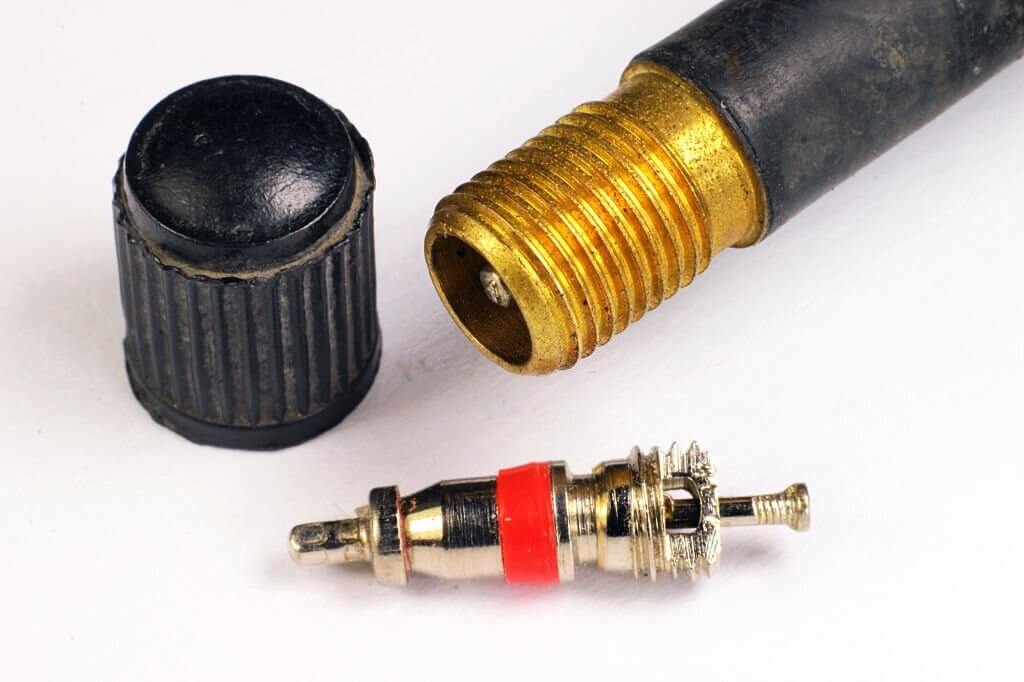 They use a spring-loaded core check valve which works together with a smaller spring to control airflow or close the valve.

Parts Of the Schrader Valve

It’s best to look at each of their advantages if you want to compare Schrader vs Presta quickly.

The pros of Schrader include;

Maybe you also like: Mountain Bike Vs Hybrid Bike: How Are They Different

What Is a Presta Valve

Unlike Schrader valves, Presta valves work only on bikes where it helps control airflow in and out of the tube. These long and narrow valves are mainly found in modern bicycles. These valves are believed to have been invented in 1880 and help make the bike’s wheel stronger and more durable. 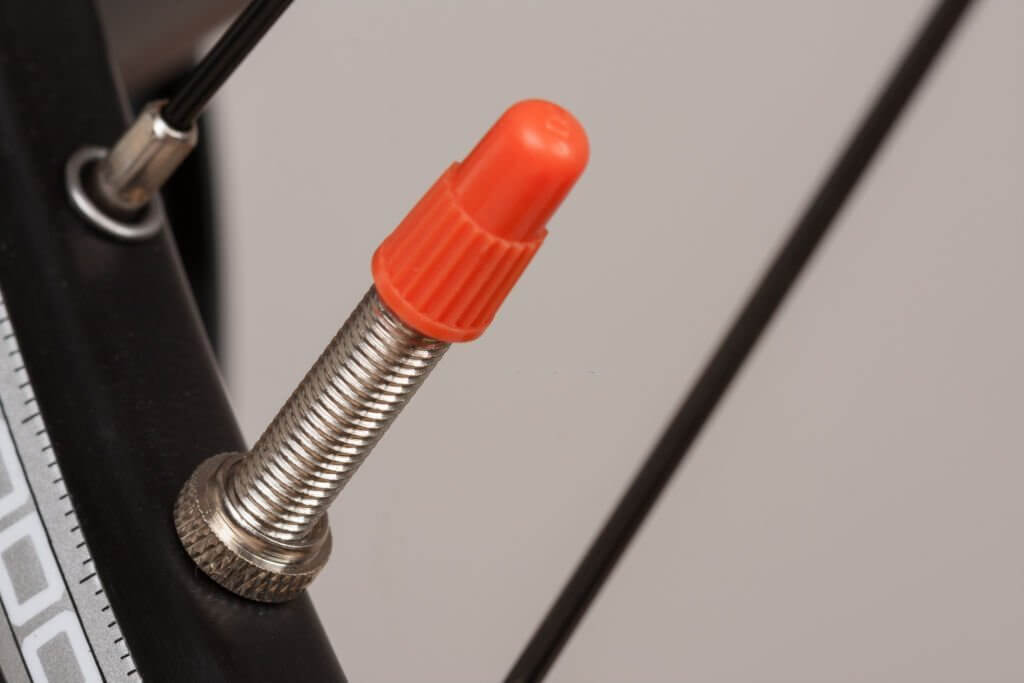 They are also lightweight and come in different lengths, enabling them to work on deep section rims like that of a road bike. Presta valves have thin valves with an external lying mechanism, making them fragile and expensive.

The Presta valve has different parts, making it the best choice for your bike.

These parts are as follows;

Pros And Cons of Presta

You will have an easy time choosing between Schrader vs Presta after knowing its advantages and disadvantages.

Maybe you also like: SRAM NX Vs GX: Understanding the Difference

Schrader Vs Presta: What’s The Difference?

If you want to make a fast decision between Schrader vs. Presta valves, it’s advisable to check on their differences and similarities. Here are what makes the two types of valves differ;

Despite the difference, the two perform the same function since the valve core nut also helps control air in and out of the valve. When you close or open the core nut, it will help in airflow regulation. If you tighten it, the valve will be closed, and no air will pass through it. However, air will get out of the valve when you open it.

Schrader Vs Presta: The Rim Holes

Another notable difference between Schrader vs Presta valves lies in their rim holes. The Schrader valve has bigger holes in the rim because they are thicker. Its thickness will make the rim not to be stronger and may not last long.

However, the Presta valve is 25% thinner than the Schrader, creating a smaller hole in the rim. The small hole will make your rim durable and capable of withstanding weighty objects.

Remember your bike’s wheel should be stronger to enable it to withstand your weight and any luggage you might carry while cycling. When your bike’s rim has smaller holes, it will maintain its structural strength, enabling it to bear any weight with no worries.

Durability Of the Valve

A Schrader valve has a bigger stem diameter, making it durable and strong with less chances of bending or getting damaged while in use. Its stem also has a valve core, making it hard to damage when inflating the valve.

However, the Presta valve has a thin core pin outside of the valve, increasing its chances of getting spoilt. So, you need to be careful with it when inflating the tire and fixing the valve cap to prevent it from being damaged. This makes it less durable and fragile.

All the Schrader valves have a removable core. You can use a specialist tool to detach the valve core from the stem where it’s attached by internal threading. The tool will enable you to remove and re-attach the core valve easily.

However, not all Presta valve cores are removable. The non detachable Presta core requires you to replace the whole tube rather than the valve. Those Presta valves that are detachable don’t need special tools to remove them from the stem. You can use pliers to do this.

You will also realize that another difference between Schrader vs Presta valves lies in their weight. Schrader valves weigh more than the Presta valves. The weight difference is about 2-3 grams. So, if you’re looking for a better way to reduce the weight of your bike, consider looking at the kind of valve you’ll be using.

Types Of Tubes to Be Used with The Valves

The Schrader valve can work on a Schrader tube and Presta tube. This means if your bike’s tube gets damaged in an area where you can find only Presta tubes, you’ll be good to go since they’re compatible. But you will not be able to fix the Schrader valve on a Presta drilled rim, which can inconvenience your trip.

It’s, however, advisable to use the Presta tube on the Schrader valve in emergency cases.

You will not have difficulty using the Schrader valve as it’s easy to use. This is because they are spring-loaded check valves. You can inflate this valve by connecting a compatible pump and then start pumping. As you inflate the tire, the pump will suppress the core pin making your work easier.

This is not the same with the Presta valve, which requires you to unscrew the valve core manually for air to pass through the valve. Removing the valve core can take some of your time and be challenging if you’ve never done so.

To use a Schrader or Presta valve, you’ve got to have pumps compatible with them. Schrader pumps are easily available in most areas because most vehicles use Schrader valves to inflate their tires. You can find the pumps in all the car shops or fuel stations near you, and some of these places can allow you to use them for free.

However, you will not find a Presta pump in all the bicycle shops except those selling Schrader pumps. So, you will have challenges getting it anywhere.

You will spend less buying Schrader valves than on Presta, which are expensive. This can be attributed to Schrader valves being versatile and used by both automobiles and bikes. The Presta valve only works on bicycles.

Maybe you also like: 27.5 Vs 29 Inches Wheels: Difference Between Wheel Size

Schrader Vs Presta Valves: Which Is the Best

After looking at the difference between Schrader vs Presta valves, you might be tempted to ask which is the best choice. You are right, as the two can be confusing to choose from because of their almost similar features.

First, identify the type of wheel you want to use the valve on. You can use the Schrader valve on automobiles and bicycles. However, the Presta valve is strictly for bikes.

You should also consider their other features, especially when using them on bikes. If you’re looking for an easy-to-use valve, go for Schrader. It’s also cheaper, stronger, and replaceable making it a budget-friendly choice. However, it requires a special tool to detach the valve core and is incompatible with deep-section wheels.

On the other hand, the Presta valve works with both Schrader and Presta tubes, are lightweight and extendable. But you will have to pay more to buy it and are not stronger, while getting its pump can also be a challenge.

How To Pump Your Bike’s Tires

After understanding the difference between Schrader vs Presta valves, you should know how to pump the tires through any of the valves. Here’s how to do that through both valves.

You will need a Schrader compatible pump to inflate your tires. You can do that by;

How To Inflate A Presta Valve

You will need to use a Presta compatible pump to do this. Then follow the below procedure to pump the Presta valve;

Maybe you also like: Mechanical Vs Hydraulic Disc Brake: Understanding the Difference

Can I Upgrade from Presta to Schrader?

Yes. If you feel you want to have the stronger Schrader valve, you’re free to do that. Using the Presta to Schrader adaptors with a Schrader screw on head and Presta valve’s body, you can do that. The combination allows you to get a stronger valve and pump.

Schrader and Presta’s valves are good for your bike’s tires. You can use either of them depending on your taste and preference. But this should be after comparing Schrader vs Presta valves to know the one that suits your wheel. A Presta valve best suits deep-section wheels; it is adjustable and lightweight but is expensive. On the other hand, the Schrader valve is cheaper, removable, and easier to pump.